Horse Fairs-Five of the Best from Around the World

Horses have always had the power to bring people together. For centuries individuals and communities have gathered to bet on their speed, showcase their abilities, buy and sell, or simply to celebrate their beauty. To this day, people still gather at annual events around the world in celebration of the horse. Below is a list of five of the most exceptional and historical horse fairs and festivals from around the world.

1. Festival of the Horse, Jerez, Spain: Jerez de la Frontera is considered the horse capital of the most famous horse-region in all of Spain - Andalucía. Home of the famous Royal Andalusian School of Equestrian Arts, Jerez hosts one of Andalucía’s largest festivals, the Festival of the Horse (Feria del Caballo). This week-long Horse Fair consists of traditional Flamenco dance and costume, bullfights and various equestrian competitions and parades. The festival dates back over 500 years and began as a commercial livestock fair. Beautiful Andalusian horses and tradition dress are the highlight of this festival. The festival takes place in late April or early May. Visit Andalucia.com for more information and see pictures from this beautiful and traditional festival.

A rider performs on his Andalusian horse at the Royal Andalusian School of Equestrian Arts in Jerez, Spain.

2. Appleby Horse Fair, Cumbria, England: One of the most unique on our list of fairs and festivals is the Appleby Horse Fair in Cumbria, England. The fair serves as the annual gathering of local Gypsies and Travellers. The history of this fair dates back to 1750 and is a time for families to meet and celebrate their history, music and folklore. However, the main business of the fair is the buying and selling of horses. Young people can be seen bathing horses in the River Eden, readying them for perspective buyers. Horses are still showcased to buyers by running them up and down public roads, just as they have been for the past 261 years. The Appleby Horse Fair takes place on the first Thursday in June and runs to the following Wednesday. To learn more, visit the Appleby Horse Fair website.

Horses being washed in the River Eden during the Appleby Horse Fair, photo courtesy of MASCG

3. National Horse Fair, Golegã, Portugal: The Feira National do Cavalo, or, National Horse Fair, takes place each year in Golegã, Portugal. The roots of the festival can be traced back to the early 18th century and began as a way to promote trade in the Golegã region. Since, the festival has evolved and today the most popular attraction is Portugal’s own horse, the Lusitano. Golegã is called the “The Capital of the Horse” and each year the festival attracts thousands of tourists from around the world. Many top breeders of the Lusitano bring horses for competition and for sale. Events include show jumping, carriage driving and an endurance competition. Traditional dress is worn by many of the riders. The festival runs from November 4-13, 2011. Find out more and see photos at the Golegã National Horse Fair website.

4. Festival of the Horse, Georgetown, Kentucky: Looking for something a little closer to home? Try the 31st annual Festival of the Horse in Georgetown, Kentucky running September 30-October 2, 2011. This festival features a Parade of Breeds, a Grand Parade with “an all horse revue”, Colt and Filly Children’s Parade, Horse Games and the ever popular “Experience the Horse” event. The festival was created to celebrate the horse heritage of Scott County, Kentucky and to promote interaction between that heritage and the downtown community. Other highlights of the event include live entertainment, a petting zoo and other non-horse related activities. You can learn more about this festival by visiting the Festival of the Horse website.

The Festival of the Horse in Georgetown, Kentucky features a "all horse revue." Photo courtesy of Jane Leigh and John Simpson (Georgetown/Scott County Tourism). 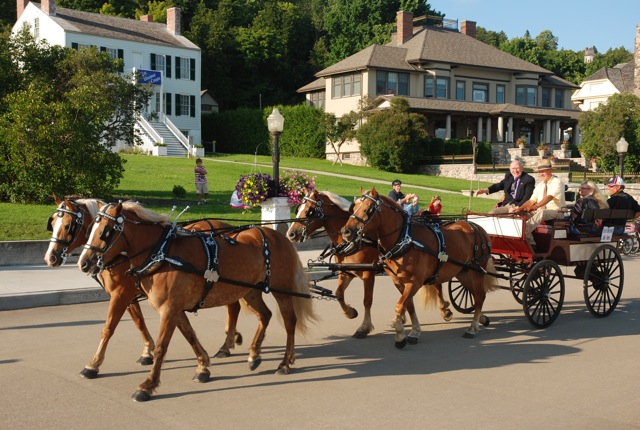 The Carriage Parade during Mackinac Island's Festival of the Horse celebrates the working horse.

Connect with Equitrekking online by following us on Facebook and Twitter. Learn more about equestrian vacations and purchase Equitrekking DVDs to view all of Equitrekking's episodes.