If you’ve got the time, go! Bonny Herman writes about her amazing gourmet riding vacation in Catalonia, Spain.

It had been about 20 degrees or less for a couple days in Northern Georgia, January 2014, unusually cold for the area and I was blanketing my horses for the first time since I moved here from Los Angeles, seven years ago. I came in to warm up and check emails and saw a newsletter from Equitrekking and decided to browse around as it was too cold to do much of anything else outdoors. I browsed with various stories and decided to look at European horse destinations and alighted on two in Spain–– one outside Barcelona and the other on Malaga. I honed in and was hooked when I saw the photo of a woman on a gorgeous white Andalusian overlooking the Mediterranean with lots of bright, blue sky. The rest, as they say, is history. That photo will never leave my mind. 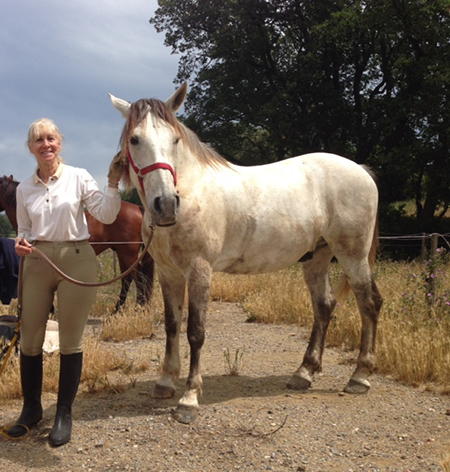 The author and Senegal in Peralada. Just removed his saddle and bridle before putting him up for his mid day mash.

I booked the Gourmet Trail Ride at Panorama Trails as it fit my schedule and desire to ride in the lovely month of May when the weather is ideal for Spain. The riding vacation included gourmet picnics on the trail and each night at different villas you would ride to near the Costa Brava. Fantastic!!! By the way, it’s only offered twice a year.

My friend and I booked a few days in Barcelona before the ride to enjoy the Gaudi architecture, big city restaurants, shops and gorgeous fountains everywhere. Even our hotel, the Casa Fuster, was a knockout in a terrific, upscale location we thoroughly enjoyed. 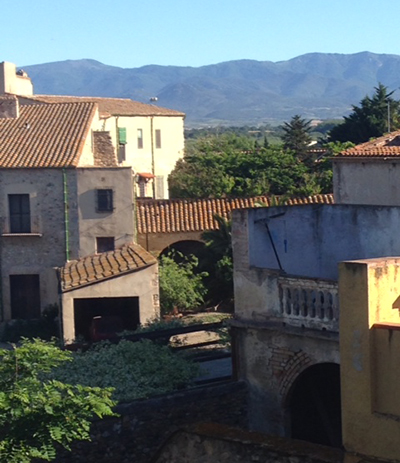 The riding experience began on a Sunday night at the first villa, Mas Roca de Fluvia, in Catalonia, where we met our hosts; gourmet chef, David Lopez; our German trail mates, Utta and Renata; and guide, Nacho aka known as Juan Hernandez. The next morning we were packed and picked up to meet our gorgeous Andalusian steeds that would take us on a wonderful riding adventure. Knowing color doesn’t matter, I broke my own rule and asked for a white one to emulate the woman in the photo! And stunning Senegal, the white Andalusian was assigned to me.

Each horse had his own suede pouch of horseshoes, curry brush and hoof pick along with marked bridle/bit/reins and a pair of huge leather saddlebags to carry that and my water bottle, jacket, iPhone/camera with room left over. We learned the way Panorama wanted their horses saddled and how to use the “cava” straps to secure the saddle bags. And off we went for our first day’s ride through forests, around fields of wheat, hunting dog kennels, through shallow streams to a lush clearing by the Fluvia River where our chef had set up a picnic table replete with China, crystal champagne flutes, wine glasses, silver utensils, napkins, a table cloth and fresh flowers. (Note: Only Champagne comes from the Champagne region of France; hence the Spanish use a similar process to create a “champagne” but in Spain it is called cava. Recall Frexinet? Try it with renewed respect. It’s good as the French equivalent and less expensive.)

Chef david opening a bottle of cava before group sits down.

We were served a fresh salad, assortment of meats and sausages, fruit, chilled soup and dessert with as much cava and or wine as one could consume. After a siesta by the river and lovely mash and water for the horses tied under cool, leafy trees, we mounted and rode a three-hour meander back to Mas Roca for the evening. 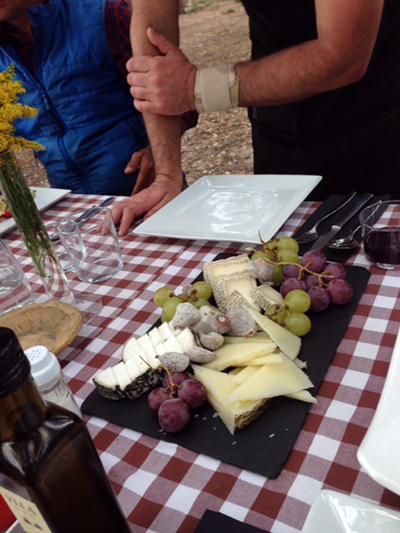 The wonderful food on this Spain riding holiday.

Tuesday we had a hearty breakfast, groomed and saddled up and headed towards an old cork forest for the lunch picnic. Along the way we trotted and galloped through more fields, tiny villages, criss-crossing country roads and going into mini rainforests, back out to open fields skirting groves, over railroad tracks until we reached the cork forest picnic grove. 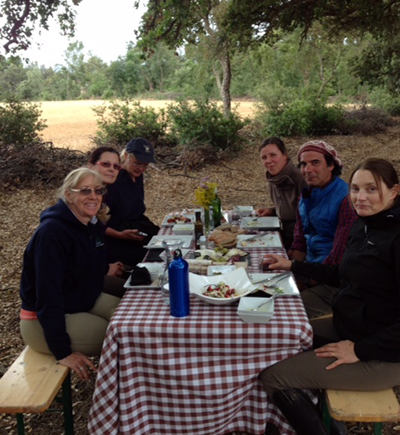 Picnic in an old cork forest in Spain.

Getting closer to the sea!

After another delicious meal and rest we remounted and headed towards the Andalusian stud farm, Yeguada Senillosa near Fortia, where, after a three hour walk/trot/canter we accidently rode in on a breeding as we entered the farm’s back gate. Remarkable. 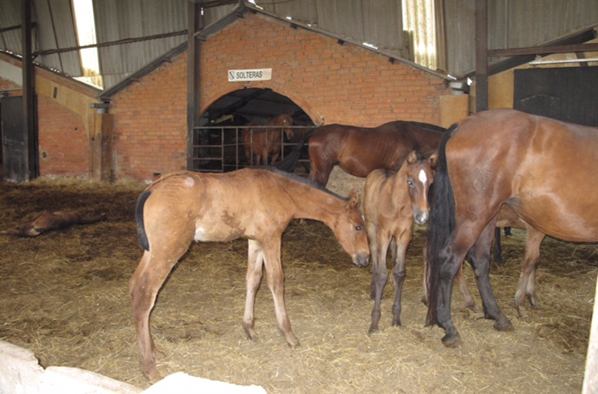 Mares, foals and fillies at the stud farm.

After our horses were unsaddled, fed and put out to a gorgeous pasture, the owner gave us a tour of the facility’s studs, their mares and the many foals and fillies. He proudly shared his stallions have sired over 700 horses. It is a very well managed operation that produces some of the top competitive Andalusians on the European dressage circuit.

Chef David prepared an outstanding, authentic Spanish paella, mountain rice, salad, other sides and terrific dessert along with more cava and wine. Sated, we went to sleep tired but happy. Did I mention I also had an olive oil massage to treat my weary muscles? It was exactly what I needed after three days in the saddle.

Now it gets even more interesting as Wednesday morning we saddled up and rode through Parc Natural del Aiguamolls de l’Emporda through the oceanside village of Sant Pere Pescador to ride along the ocean. The weather was quite cool and overcast creating a nice temperature for the trek to the sea. 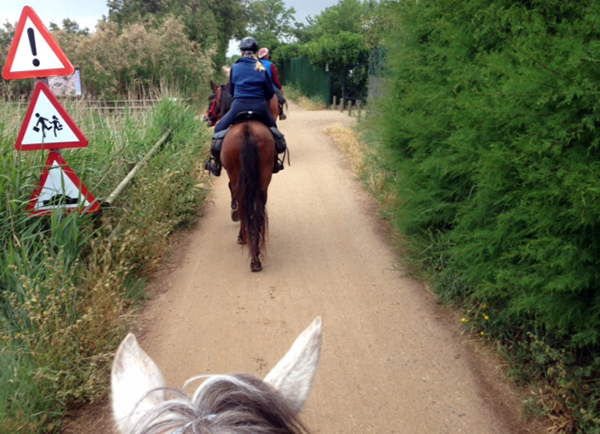 Riding to the beach.

We rode our horses through the village’s paved streets, trotted quickly to cross the two-lane bridge with car and truck traffic to get to the trail that leads to the ocean path. Drivers were courteous but non-plussed about our presence. I was giddy about the whole thing. By the way, Senegal did not like narrow bridges or black plastic tubes. Otherwise he was quite fun to ride. The beach ride was glorious. 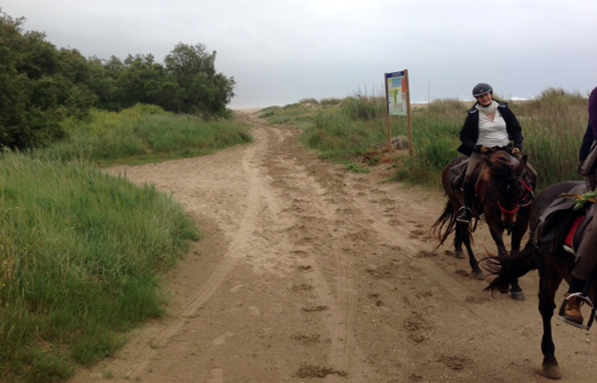 Horseback riding on the beach in Spain.

Thursday one of my favorite places to ride through was Peralada. It’s such a blast to ride on the narrow, paved village streets and hear the clip clop of the hooves. Some places the streets were so narrow you could touch the walls and look over to see people’s private gardens and charming homes. Peralada is also known for its storks and we looked up to see many sanctuaries atop high buildings to encourage them to stay and nest and they do. Stork images are also present on locally produced wine bottle labels and a no longer produced, automobile with a hood ornament reminiscent of the Rolls Royce “Spirit of Ecstasy”.
We tended to the horses and bid them good night and walked into town to find Cas Gens, our night’s haven. David was already there with glasses of cava poured at the ready. He treated us to an olive oil tasting along with crusty bread and succulent green olives. Really, all the oils were good including the one used for my massage. But by then I had three glasses of cava.

After lunch we all wandered over to the immaculate pool area when I promptly took a nap on one of the inviting chaise lounges. Others took a swim while I slept. Then refreshed, off we walked to tour a very private, by appointment only museum/convent/residence owned by that aforementioned automobile manufacturer’s family. He created a fabulous library, an ancient coin, glass, and ceramic collection and then a wine cellar with many old wine making presses, casks and other implements. The facility is undergoing refurbishment and expansion so we were given coupons to redeem a glass of the wine at a nearby café. We did.

Up and out the next morning for a brisk ride through more gorgeous farms, shaded paths and little villages to reach one of Chef David’s favorite wineries, lavinyeta. It is an already popular, young winery run by a young couple using the latest and greatest methods to produce rose, red and other wines. Their methodology is environmentally sensitive and totally integrated–– nothing is wasted, rather in a tight recycling circle from the skins to the pheromones used to attract bees to eat the bad larvae that chew on the grape vines vs. pesticides. After a tour and wine tasting and another incredible lunch we had a long siesta at the vineyard. The horses enjoyed their four-hour rest too.

Well rested and fed horses while we toured winery had tasting and gourmet lunch.

But saddle up we did and followed Nancho to Garriguella, our final night’s stop.

The lovely little hotel/villa incorporated into the village with a very unpretentious façade, opened up to a flowery courtyard and wonderful Jacuzzi tub we eagerly hopped into then we changed and walked to the local co-op to purchase their best olive oil to take home.

Our last gourmet supper came all too soon. We had eight exquisite dishes starting with a crispy potato wrapped around a prawn (my all time favorite item), bacon wrapped around dates; mushroom balls with a mushroom sauce; cod on marscapone cheese; monk fish with fruit, lots of cava and a delightful, light, perfectly chilled, locally produced wine. Honestly, I don’t recall dessert. 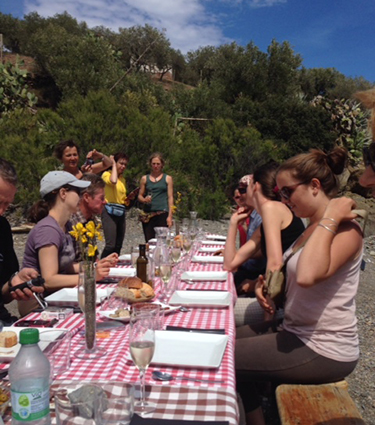 Saturday came too quickly for the final ride. It was extra special because it reminded me so much of the terrain in Northern Los Angeles County where I rode my Paso Fino for so many years. This ride was stunning as we climbed up and down and around mountains. At the last stretch we didn’t see another person for three hours. It was high, desolate, and so quiet. I usually rode at the end of the five person queue to allow my horse to walk at his pace and he enjoyed my off key songs, many with the wrong or made up words.

His ears twisted back and forth and provided a great audience up and down some steep terrain. We had to dismount and walk down some rocky places that I used a sturdy stick found along the path to support me from slipping. It worked. 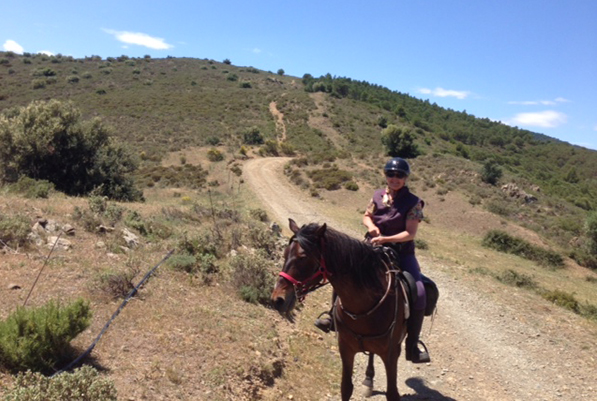 My friend Anne and Attila. We dismounted and walked the horses down that rocky incline, just in case. Now riders up and onward to the sea.

And then the prize–– the view of the sea! The mountains leading to the water and the bright azure sky melting into the water was scrumptious. I tried to savor every moment. We rode down the mountain to the beach to join other riders for a final picnic by the shore. Outstanding!

Usually when I tell the story of this ride to my friends, I have to pause and gulp as I hold back the tears, which fall now, even as I write this a month later.


About the Author: Bonny Herman is a 67 year old equestrian who owns two Paso Fino horses she trail rides and is a volunteer rider for County Mounties in Hayesville, NC. Her horse farm is close by in Northern Georgia, where she retired seven years ago from her position as President/CEO of a private, non for profit, non partisan, business membership lobbying organization for 20 years. She has owned Pasos since 1989 and looks forward to her next riding trip in Costa Rica on Pasos in 2015.