Here in Part 2, Adams shares that many of his jousting mounts are rescue horses and how he prepares them for the "List."

Karen Braschayko for Equitrekking: How do you train horses for the joust?

Shane Adams: How do you train a horse to go around barrels? How do you train a horse to jump over a four-foot fence into a pool of water on the other side? It’s the same principles — it’s a matter of trust, right from the start, working with my horses. My discipline of natural horsemanship is the Shane Adams common sense method. It’s one step at a time, one piece of equipment at a time and eventually you build that trust.

Eventually these horses understand the game. They get amped up about it, just like a barrel horse gets amped up backstage before the gates open. Our horses get amped up as soon as they start coming around that corner, because they know that their job is to charge on, and some horses take it that much further.

Equitrekking: Do you think horses like having jousting as a job? Do they enjoy being part of the sport?

Dragon, my 21-year old Percheron stallion, is now retired from jousting. He has paid his dues in the sport and earned his retirement, but he still loves to be able get out there. When I just ride him into the jousting arena, I can feel him underneath getting excited, start to prance and just want to get into that list. I’m not sure too many people have seen a Percheron do a natural piaffe, but this horse, in a joust list, he’s a third level dressage horse.

If he’s just out in the paddock, Dragon’s like, “Oh, whatever.” Even mares don’t get him excited too much anymore, “Oh, whatever, just another girl.” But all of the sudden, you put on a piece of armor, it’s like the costume they wear, and you add a crowd or a camera… That horse, without even going into the arena, if he sees a camera, you can see him arch his back and shake his mane and go from Pee-wee Herman to Hulk Hogan automatically, just puff up for the camera. They absolutely know what their jobs are. They love their jobs.

Out of all the horses I’ve ever had, 90 percent of them wanted to be jousting horses. The horses loved the sport of jousting, whereas the other 10 percent would rather just have kids get on their backs and walk them around for horse rides. You have to respect that. You have to look into a horse’s eyes, and see what he’s saying to you. If he’s saying alright, let’s do it, then great. If he’s saying,“I’m not going to have any part of this,” well, then it’s best for you not to get on his back and try it.

Equitrekking: How do you find your jousting horses?

Shane Adams: Quite a few of the horses we have are rescue horses. Some of the favorites, Crispin and Palladin, were both from a slaughterhouse in Florida. They were rescued by another knight, John Angel, who is now retired. The horses were in the same pen together, and the only people bidding at that auction were the meat buyers. Crispin is an American Cream, and American Creams are on the endangered breeds list. Yet he was in the pen, ready to be auctioned off.

John Angel picked both of these horses up, and he started training them. Crispin was four years old at that time, and Palladin was three. After working with the horses for six months, he contacted me and shipped the horses up to Canada. I started putting the joust training on Crispin, and Crispin was coming around perfectly, and then Palladin joined the fleet. Sure enough, eventually they became my horses.

Dragon was seven years old when he was found in a Mennonite barn, practically chained to the wall because he was so wild. He’s a little 16-hand Percheron, but he had some fire him. They just couldn’t handle him anymore. They tied him up in this barn. There were cuts on his nose from the halter, and his tear ducts were burned out because of the ammonia. We went there looking for a mare in foal to this horse, and we came home with the mare and the stallion too.

Dragon was broke to harness, but he liked breaking harness. He’d rear up and lunge, trying to break all the straps. That’s how he knew he could get away from plowing. I knew I had a little bit of work ahead to train him to the sport of jousting. Though I had some holy-gee moments on his back, we did bond together. We are the best of friends, as I am with a lot of the horses who come to us.

As my name started getting out there as a person who works with horses in this unique and up-and-coming sport of jousting, a lot of people started contacting me. Many had bigger horses and couldn’t handle them, or sometimes they just had problems trying to find a home for a big horse. We have multiple horses now who came from homes that just couldn’t provide for them any longer, and the people didn’t want to see anything bad happen to their horses. They were able to find a home here.

I wish I could take hundreds of horses, but I can’t. I have to still stay sensible and realize that even though I have a TV show, horses cost money. I’ve got 19 of our own horses here. It takes a large dollar figure to give horses the care that they need. Draft horses are easy keepers, but they still eat, they still poop, they still grow feet, they still have to see the vet once in a while, they still have to get their teeth floated, and they still get into mischief.

I like my horses to be horses as much as possible. I don’t like closing my horses into stalls. I want my horses to be outside, because a lot of the time they’re on a trailer traveling from showground to showground, festival after festival. So when my horses are home, I like them to be able to go out in the mud and get dirty. 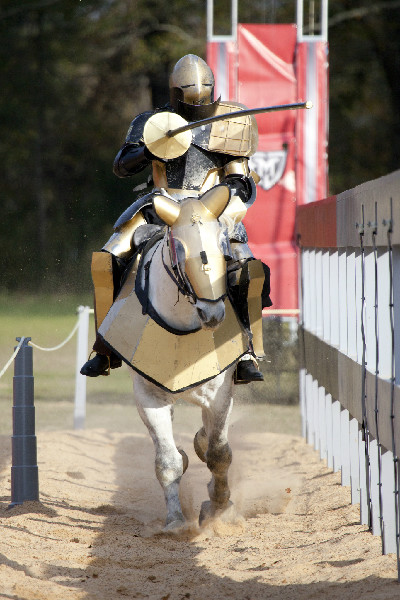 A knight gallops down the joust list aboard a draft horse on the show Full Metal Jousting.

Equitrekking: Why do you use draft horses?

Shane Adams: Though I grew up with Arabian horses, and though I’ve ridden and loved many horse breeds, such as warmbloods, Hanoverians, Andalusians and Friesians — I’ve realized throughout my years in this sport that the best ones at it are the draft or light draft horses.

They can handle the weight. That’s the reason why they were bred to be what they are. A lot of people think that draft horses were for plowing, but they don’t realize that these horses were originally bred for war.

You do get some horses who look completely different even though they’re the same breed. Gulliver has quite the Arabian characteristics in a big Percheron. His buddy Jefferson, who is scarred up with bite marks from the paddocks since he likes to get into it, has that really strong face and strong bone lines.

Equitrekking: Were the horses on the show your horses?

Shane Adams: Every horse we used on the show was my horse except for one, and that was Navarro. Navarro used to be mine. I sold him to one of my students. I had Navarro when he was five years old, and he was purchased from an auction. After I trained him up, my jousting student and that horse completely bonded. He brought the horse carrots every day and really loved on him. I sold Navarro to him so he could have his own horse. Basically, all the horses used on the show Full Metal Jousting are my horses.

Equitrekking: What do you look for in a jousting horse?

Shane Adams: Every horse has their own personality. Some people ask if an alpha horse is the best jousting horse. Well, not necessarily. What you need is a horse who will trust you to go from point A to point B. Sometimes really smart horses are always questioning what’s coming at them instead of understanding the trust. That bottom-of-the-totem-pole horse could turn out to be a better jousting horse than the alpha. Every horse is different.