To say trail riders new to exploring Shawnee National Forest in Southern Illinois are surprised and amazed at the geologic diversity, and unparalleled beauty, is an understatement. The clear streams, hardwood forests, water falls, steep cliffs, sandstone bluffs, overlooks, and magnificent views make the 280,000 acres of federally managed lands a jewel in the National Forest system. With the Mississippi river on the Western boundary, and the Ohio River on the Eastern boundary, there are 7 designated wilderness areas and 6 rivers that are candidates for Wild and Scenic. Within the forest there are 1250 miles of multi-use trails (horses, mountain bikes, hikers), with 225 miles open to horses. Shawnee National Forest is located South of Harrisburg, IL, off of state highway 145. 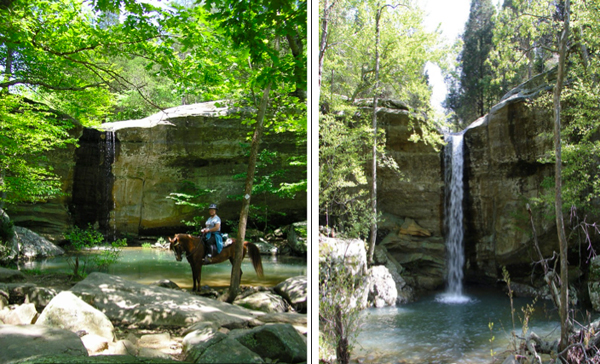 The Shawnee trails range in difficulty from fairly easy to difficult with terrain that is steep, narrow and very rocky with great water crossings. You can ride for weeks and still discover new trails. The most popular trails are located in three of the wilderness areas: Garden of the Gods, Lusk Creek, and Bay Creek. Each of the wilderness areas have their claims to fame and the easiest way to explore the sites is to stay at one of the horse camps located adjacent to the forest and ride from there. All the horse camps also have day rider trailer parking areas.

The Forest Service trails, as well as, the trails on private land within the forest are marked and maps are for sale (25% of the proceeds go back into trail improvements) at the campground offices. A compass, or GPS, is a good idea since it is easy to get turned around on some of the trails. Because of the rocky terrain it is recommended that you have your horse shod.

Garden of the Gods Wilderness Area

Garden of the Gods was forged some 320 million years ago when nature sculpted some very unique sandstone formations. The Garden is one of those places that has to be seen to be believed and the views are breathtaking. There is a tie-up so you can hike to the observation point and it is worth the walk. 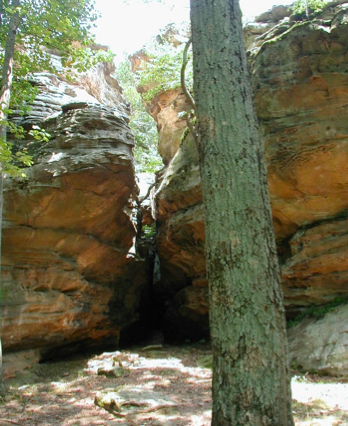 Unusual rock formations on the trail to Garden of the Gods.

A view of the Garden of the gods, in Shawnee National Forrest, Illinois, USA. Photo by Daniel Schwen.

Located around Eddyville, IL, (referred to as the “Trail Riding Capital of Illinois”) this is the epicenter of Shawnee’s equestrian trail system. Lusk Creek Wilderness topography is diverse with creeks running through the canyons and gorges, second growth forests, hidden caves, and rock walls that rise 200 feet in some places.

Lusk Creek Wilderness has been called the least civilized piece of the Midwest and you will see why when you ride to sites like Indian Kitchen, Secret Canyon and Natural Bridge on the East side of highway 145. Evidence reveals that the “Kitchen” was used in prehistoric times, perhaps as long as 10,000 years ago. There is a highline where you can tie-up your horse, stop and enjoy the view or hike down to the bottom of the canyon. 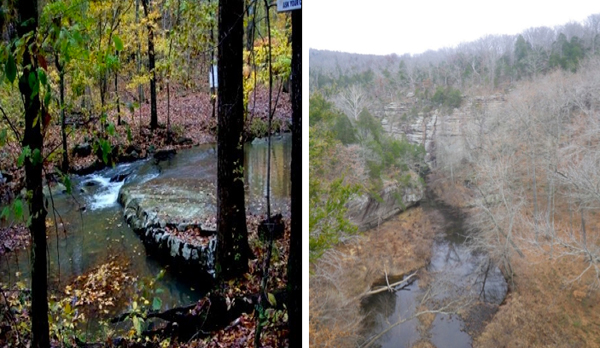 Another favorite stop on this side of the wilderness is Secret Canyon. The narrow, rocky trail leads you by unique rock formations, beautiful ferns, and steep canyon walls. You finally descend to the base where there is a large cave and a highline where you can tie-up and enjoy your lunch and explore the canyon.

One Horse Gap trail area is remote and is best accessed from 34 Ranch Campground (located off Illinois state highway 34/145). The trail is made up of segments of old trails, old homesteads and many interesting things can be seen along the trail from old cemeteries, to towering cliffs, to beautiful streams. The “Gap”, the trails namesake, is a trail through a narrow gap in the bluff that allows only one horse at a time to pass. 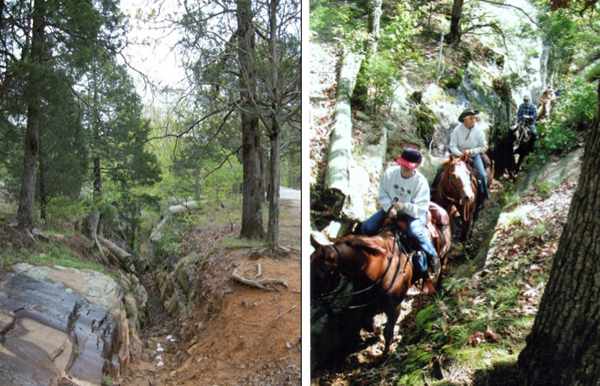 On the west side of highway 145 there are equally beautiful trails that feature rugged canyons, woods, ravines, water crossings, and wonderful caves. Each trail has its own beauty, but don’t miss Double-Branch Hole, Jackson Hole, or Peter’s Cave.

On the trail out of Hayes Canyon Campground you follow a massive sandstone gorge called Double-Branch Hole that features two cascades of water–– the double branch–– that fall into the gorge.

From Double-Branch Hole you can follow the trail signs to Jackson Hole. At Jackson Hole there is a highline where you can tie-up and explore Hayes Canyon and the Jackson Hole waterfall. 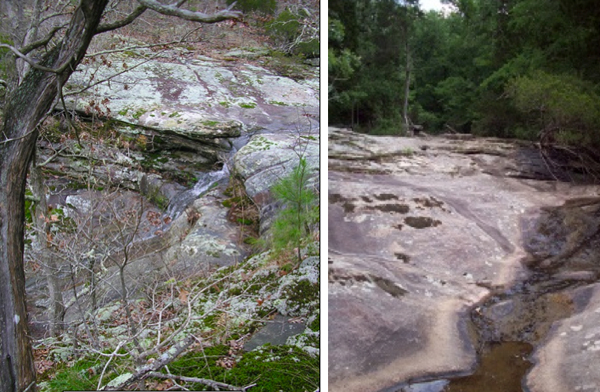 Leaving Jackson Hole, continue on the trail to another beautiful destination–– Peter’s Cave. You follow a pretty bluff and then descend into the valley and find Peter’s Cave. There is a tie-up where you can relax and enjoy lunch and explore the surroundings. 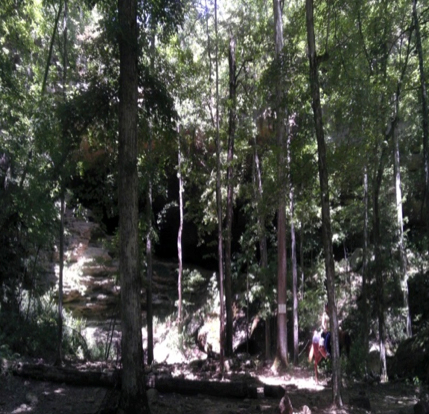 The best way to explore this part of the forest is from Bay Creek Ranch in Simpson, IL. Bay Creek is the land of scenic canyons with sandstone cliffs and a lush hardwood ecosystem. This all culminates at Jackson Falls. Watch the rocks above you since this area is popular with rock climbers and for rappelling. The trails range from moderate to challenging.


About the Author: Connie McNabb is an avid trail rider who lives in Edwardsville, IL. She, and her trail buddies, have been riding the beautiful Shawnee for over 25+ years. Though they ride there often, they constantly discover new trails. Connie writes, "the season changes in the forest are gorgeous. The landscape changes with each season and there is such diversity, you never tire of it."