Dutch Oven Cooking on the Trail

Dutch oven cooking is perfect for trail rides; you can put dinner on to cook, go on your ride and return to a moist, flavorful meal, all ready to eat.

With Dutch ovens, cooking involves patience. You can’t hurry a Dutch oven, which Osborne Russell and his fellow trappers understood all too well during their travels through the Rocky Mountains in 1834-43.

After surviving on boiled roots for 10 days, Russell and his men were thrilled when they finally got bear meat. In Journal of a Trapper, Russell wrote, “...the meat of two fat Grizzly Bear was brought into Camp. Our Camp Kettles had not been greased for some time: as we were continually boiling thistle roots in them during the day: but now four of them containing about 3 gallons each were soon filled with fat bear meat cut in very small pieces and hung over a fire which all hands were employed in keeping up with the upmost impatience: An old experienced hand who stood six feet six and was never in a hurry about anything was selected by a unanimous vote to say when the stew (as we called it) was done but I thought with my comrades that it took a longer time to cook than any meal I ever saw prepared....”


Barbara Kennedy, who arranges Dutch oven cookouts via her company Cowgirls Forever in Desert Hills, Arizona, helped me understand why Dutch oven cooking had fans among cowboys on cattle drives and pioneers in covered wagon trains, and why trail riders should continue this tradition today. I met Barbara in Cave Creek at the Buffalo Chip Saloon, a restaurant that provides hitching posts out front in case you want to ride your horse over for a meal. An award-winning Dutch oven caterer, Barbara taught me how to make an awesome peach cobbler. (View the recipe for Dutch Oven Peach Cobbler)

I was excited to find that the dessert was fairly easy to prepare. We just dumped the ingredients into the Dutch oven, gave a stir and then surrounded the covered oven with hot coals. You do need quite a bit of strength to lift the heavy pot and the agility required to dance around the wafting smoke when the wind blows. Barbara also baked biscuits, cowgirl quiche and chili in her pots. I had thought that one could only make stews in these heavy, cast iron ovens, but I was pleasantly wrong. In fact, you can bake, fry, boil, roast and stew virtually anything in a Dutch oven. 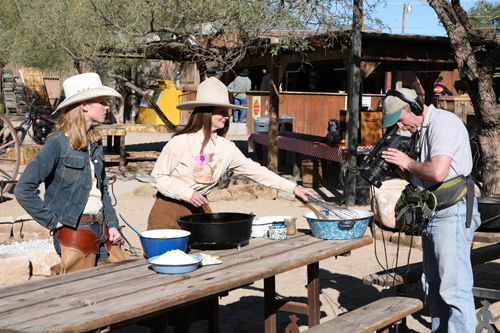 Had I been current on my Lewis and Clark history that day, I would have known Dutch oven meals can be surprisingly diverse. During their 1804-1806 journey to the Pacific Coast, the explorers baked tarts with fresh plums, wild artichokes and truffles. Dutch ovens became so prized in the 18th- and 19th-centuries that people passed them down to the next generation. Mary Ball Washington, the mother of America’s first president, specified her wish to pass down her “iron kitchen furniture” to her grandkids in her will in 1788.

You’ll still find folks today whose families treasure their Dutch ovens. Jack Wallace owns enough Dutch ovens to feed more than 400 people, and even his 13-year-old granddaughter has cooked on them since she was eight (yes, it’s that easy to learn). Jack is such a fan that he’s the director of education at the International Dutch Oven Society, which organizes Dutch oven events. One reason people hold onto their Dutch ovens is because each one develops a unique flavor over time, becoming “well seasoned.” Fats and flavors of meals cooked long ago coat the cast iron. This coating is important to the chef and eaters, because it makes the food that much more flavorful. 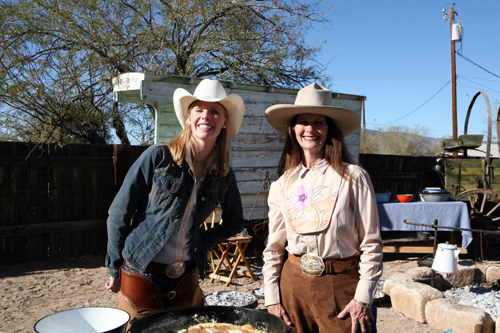 Although traditional Dutch ovens are made of cast iron, for a trail ride, outdoor ones make the most sense. Designed with three short legs on the bottom of a big, round, thick-walled pot, the outdoor version is equipped with a wire handle and fitted with a tight lid, upon which you can place your coals. This alternative way of cooking can be handy for when campfire burn bans are in effect (always check with local authorities to ensure you are not violating the ban). You won’t have to worry about the coals and ashes falling into what’s cooking, because the lip around the edge of the oven lid prevents that from happening.

If you do have the option of cooking over a campfire, you should take it. You can even take a tip from Old West pioneers, who lit their campfires using wood, dried buffalo chips, sagebrush, twigs or whatever fuel was available.

After trying out Dutch oven cooking for myself, I can see how people become obsessed with it and why this pioneer method has survived for so long.

Get the recipe for Barbara's Dutch Oven Peach Cobbler. Read an interview with Barbara Kennedy and get her Chile Verde Recipe Dutch Oven Style.