Scuba has been one of the hardest yet rewarding horses that Dr. Trogstad has ever trained. Read below about the night she wondered if she had taken on a "Crazy Horse in Disguise."

I was informed of an ad for a 4 year old Arabian gelding, Scuba, with “spirit” a short 10 months ago. I went to go look at him and discovered that he had minimal human contact and the owner was “weighing” the options on what to do with him as she couldn’t find anyone to buy him or even take him. I told the owner to “save the bullet” and I would take ownership of him. She thought I was partially crazy and partially stupid. 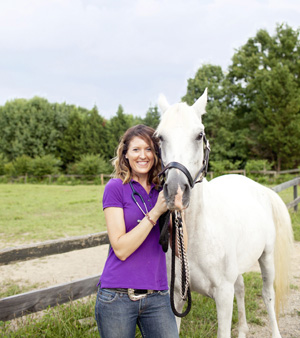 I trained him to a halter and to lead. I taught him personal space and what positive human contact was (surely he was abused at some point). I taught him about grain and what a farrier was, what vaccinations were and what grooming consisted of.

The last few months I have been slowly backing him and currently we are walking and trotting under saddle. Scuba has been one of the hardest yet rewarding horses that I have ever trained. He is extremely intelligent, which is wonderful because he catches on to concepts easily and quickly, however, a curse because he bores easily, and I always need to be thinking one step ahead of him. He also spooks periodically, not out of “naughtiness”, but by reverting back to his old ways of being a four year old and never being shown things that other horses his age are accustomed to seeing. 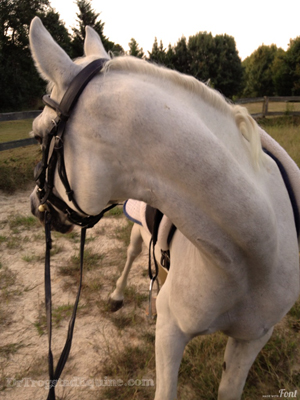 
Tonight was the first night in over a week that I got on my steed. I was planning on having to hold on tight during our ride, waiting and watching for anything and everything that Scuba could spook over. With the cooler, breezier weather and the fact that Scuba didn’t go outside today, being a bit silly was a good possibility.

I walked him down to the round pen without any nervousness or boogey-man spooks… alright, so far so good. I hopped up into the saddle and made him stand for a minute or two to think about the job at hand-- he was stellar. 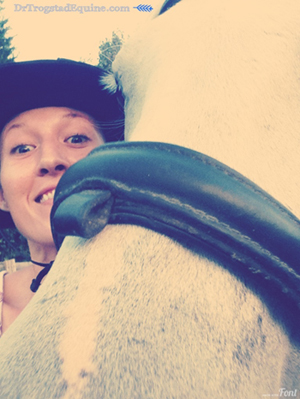 After about 5-10 minutes, one of the barns OTTBs came out to the neighboring ring for a lunge and was acting like a twit on the end of the lungeline, bucking and whinnying like crazy. Scuba stopped dead in his tracks, his head and ears could not be more erect, and body incredibly tense. Was I on a crazy horse in disguise?

I felt a blow-out about to happen, so I dismounted quietly before Scuba could do anything naughty. I always end any training session on a good note. I walked him around a bit to insist that Scuba could still pay attention to me although there was someone doing something super cool in the next ring over (it’s hard having to listen when you want to go play with the bad boys). He even let me take a picture or two. Although our ride was cut short, the ride that we had was awesome. It was even more incredible considering the weather, how crazy the horses have been behaving, and the lack of turnout. Tomorrow’s ride will be even better!


About the author: Jessica Trogstad, DVM graduated from North Dakota State University in 2006 with her degree in Animal Science, and then graduated from the University of Minnesota’s College of Veterinary Medicine in 2011. She lives and works in Georgia and writes about her experiences training her Arabian gelding, “Scuba,” on her site Save The Bullet, at Crazy Horse in Disguise.