Back Country Horsemen in New Mexico Clear the Argentine Trail

Back Country Horsemen from Ruidoso and Albuquerque work to clear the Argentine Trail in Bonito Canyon, helping to keep trails open for equestrians and enjoying a beautiful trail ride.

Photos and story from Caroline McCoy

The weekend before Labor Day, while Nogal Canyon was a regular city of tents and campers, i.e. bear hunters, Back Country Horsemen (BCH) from Ruidoso and Albuquerque got together to clear the Argentine Trail in Bonito Canyon. Our lovely lands in the USA have been made National Parks to preserve them, yet government funds to maintain them are continually robbed to pay for costs of fighting fires, especially out here in the west. 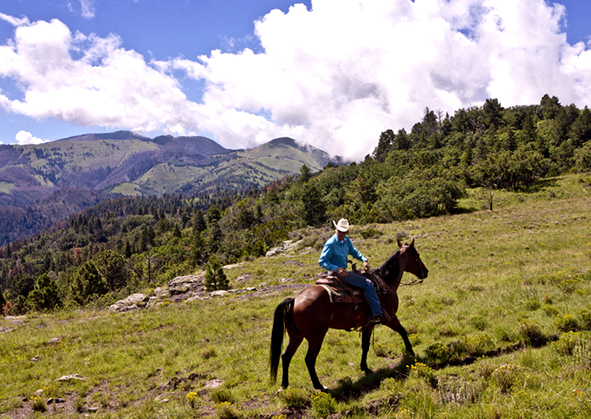 Our Forest Service does not have adequate funds to maintain the trails, keep erosion down and clear deadfall. We who use the trails might think of these as "free" to us and be grateful for it, but there are rumors (just like shutting down the post offices which has turned from rumor to action) that the trails will be shut down as they would be considered "dangerous" if not kept maintained. The Back Country Horsemen of America is a National Organization whose purpose is to get membership interested in helping to maintain these trails, as well as just have fun using our trails. This was one of our work rides.

Early up to feed the horses before the ride, I saw Venus, Jupiter and a lovely crescent moon.

Our recent plentiful monsoon rains have filled Bonito Lake up to the edges of its banks. Our group gathered early for Wolf's generous gift of burritos. Oscar Simpson, in the red coat, camped out in the Argentina campground the night before, having come from the Albuquerque BCH. He is our Legislative representative on a National Level. Dottie Jordan, Elfie and Rich stayed on foot to clean up the campground while the rest of us (some not shown) rode the mountain. 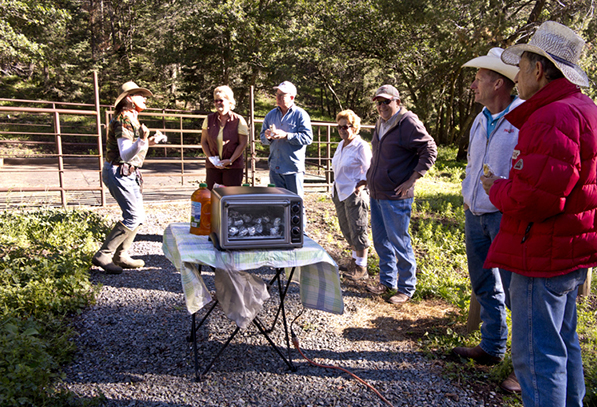 This is Oscar's "hotel." Wolf's horse grazed freely while we chowed down our burritos.

During the cleanup, Oscar and John Jordan wrestled with a resistant branch. Mike mightily hung onto a bent bough while Wolf sawed. At one point, Wolf asked me if I want my picture taken. Peach and I figured out the best place to take a picture while Mike Hernandez tied his horse, ready for work. Oscar Simpson took a turn sawing.

After the first cut, the tree was still too heavy and too long to shove back off the trail so another cut was necessary. To keep the saw from binding, Mike sat on the end of the tree and Wolf added his weight to Mike's to try to crack the tree. Oscar's horse said–– now those are two funny guys! Oscar, John Jordan, Wolf and Mike wrestled a small tree with Paula and her mules in the background. Mike thought he could rope a tree and drag it off the trail, but it proved too heavy and required more sawing.

Close to the top there is a crossover with a steep dropoff, which turns into a waterfall when the stream is running. Oscar led. Paula's young mule wasn't feeling confident. Her feet were really braced.

Coming up to the corrals at the top of the Argentine Trail is always a thrill. Mike rode up to see the Crest view.

Up top, it was burrito time, and Mike's dog, Bandit, knew it. More and more of us gathered for the burrito break.

This is a neat idea: a velcro dog collar with your phone number printed on it in case your horse gets away from you. 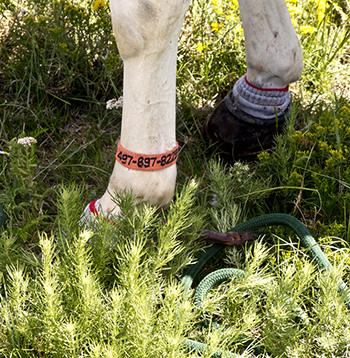 Wolf pointed out the clouds rolling in over the top. We continued along the Crest Trail, seeing Nogal Peak from the west side. 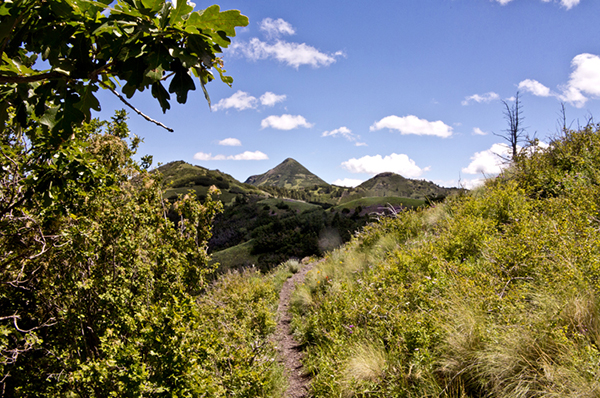 While Mike was roping that tree, at one point his horse spun around to maintain his balance, so the rope went taught across Mike's cantle bag and ripped it open, throwing all its contents out into the grass and brush. It wasn't until nearing Skull Canyon that Mike realized he didn't have his cell phone. He rode back to get it while the others went on down Skull. But Mike's dog, Bandit, didn't realize Mike had left the pack until about a half hour later. When he did, he wheeled around and high tailed it back up that trail and down the Argentine until he found Mike at a water hole. One good dog!

The Documentation of these work rides, and any BCH member ride, which counts the hours of riding and the hours of travel to and from, is logged and taken to Washington by our State Speakers, such as Oscar Simpson, to fight to keep our trails open, documenting interest. It's important for people to join their local BCH chapters, even if you can't ride much or do anything at all. Numbers count.

About the Author: Caroline McCoy rides the White Mountain Wilderness and the Fort Stanton Trail system almost every week of the year on her Quarter Horse mare, Peach. McCoy is age 74 and Peach is 14. McCoy hopes to ride her partner 'til the end of both of their lives. McCoy makes a photo-journal of many of her rides and is about to publish a book of these rides. Anyone wishing to be on her "My Rides" email list may request to do so via email.

Check out more of Caroline McCoy's riding adventures on Equitrekking.