Learn the history and characteristics of the Arabian horse. A history of close interaction with people have given Arabians an innate ability to bond with humans. Find out if this is the right breed for you!

Equitrekking interviews Hilary Nixon, Communications Coordinator for the Arabian Horse Association. She shares her insight into one of the oldest and most influential horse breeds in the world, the Arabian.

One of the oldest known riding horses originating from the deserts of the Middle East, Arabians were once bred by the Bedouin as war mounts. These horses bonded with their human companions, making them reliable mounts in times of peril and uncertainty. They were ridden and beloved by many famous historical figures, granting them special traits which carry through to the modern day Arabian owner.

Find out if the Arabian is the right breed for you by reading below!

The Arabian in a costume class /  Photo: Don Stine

Raina for Equitrekking: What are the origins of the Arabian horse?

Hilary Nixon: The exact origin of the Arabian horse remains uncertain. There are arguments that the ancestral Arabian was a wild horse in parts of Northern Syria, Southern Turkey, and the Piedmont regions to the East. Some historians believe the breed originated in the southwestern part of Arabia.

A horse very similar to an Arabian was portrayed on the walls of limestone caves, along with other animals of “The Hunt.” The depictions are estimated to be between 25,000 and 40,000 years old.

The first written documentation of the breed is from more than 3,000 years ago. It verifies that the Arabian horse has changed very little from the past.

The first and most famous Arabian breeders were tribesmen of Arabia, known as the Bedouins. They valued the Arabian horse above all other possessions, because it was crucial to their survival and prosperity. Centuries of close interaction with people have given Arabians an innate ability to bond with humans.

Watch a video of horse riding with the Bedouin in Jordan's Wadi Rum Desert.

Arabian horses became even more cherished, when the prophet Mohammed made them a cornerstone in his Holy Wars. Mohammed improved his army by elevating the horse to a sacred level. As the Islamic religion grew, the Arabian horse was introduced in North Africa, Spain and France. The breed grew further when the Christian Crusaders landed in the Holy Land in the twelfth century. The Crusaders were impressed with the swift and tough Arabian horse. They imported large numbers of the breed into England and France. As Christianity spread across the globe, so did the Arabian horse.

Between 1683 and 1730 a revolution in horse breeding occurred, when three Arabian stallions were imported to England. The Darley Arabian, the Byerly Turk and the Godolphin Arabian founded the Thoroughbred breed. Today, the majority of all modern Thoroughbreds can be traced to these three Arabian sires. By direct infusion, and through the blood of the Thoroughbred, the Arabian has contributed to all the “light breeds” of horses.

Our first president, George Washington, rode a Half-Arabian. He crossbred his Arabian stallion with cavalry mounts to strengthen the military. The popularization of Arabian horses in the United States began with their introduction at the Chicago World's Fair in 1893. Arabian horse breeding most notably expanded within the last half century, as the popularity of showing horses soared. 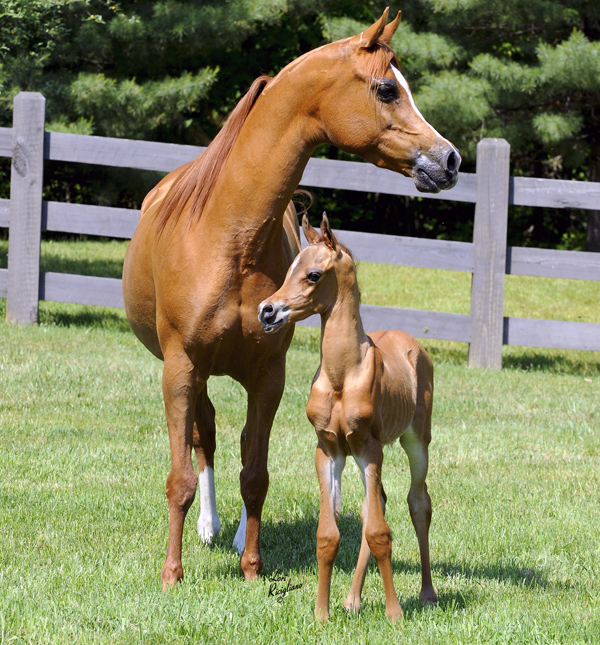 Equitrekking: What are the general conformation characteristics of the Arabian horse?

Hilary Nixon: The Bedouins of the Arabian Desert depended on their Arabian horses for survival. While they valued the beauty of their horses, they were equally adamant that their horses were strong, with deep chests, straight legs, large joints and good lungs to carry them across large stretches of their desert homeland.

Arabians have a short, straight back; usually 23 vertebra as compared to 24 with most other equine breeds. They have perfect balance and symmetry, a deep chest, well-sprung ribs, deep girth and strong legs of thick density. Arabians can be most readily identified by a finely chiseled head with a dished face, long arched neck, and high tail carriage.

Equitrekking: How has the Arabian horse been used and ridden throughout history?

Hilary Nixon: The Bedouins were ruthlessly selective and careful in their breeding programs. They placed the greatest emphasis on performance, concentrating on stamina, soundness, speed, disposition and loyalty.

The Bedouins needed those traits. They used horses primarily as an instrument of war, like most societies in that time. Mares were considered the best mounts, because they wouldn’t nicker at the enemy tribe’s horses––warning of their approach.

Throughout history, one of the Arabian’s major uses has been their genetic contribution to many other horse breeds. They were used to improve stock with characteristics of prowess, courage, speed, and endurance.

Careful breeding has allowed the Arabian to last many centuries. They exhibit a bond with humans that is really extraordinary. Arabians had to travel quickly through the desert for days at a time. They were bred for stamina, soundness, speed, and disposition. Endurance competitors prefer to use Arabians, because they value the same characteristics.

Equitrekking: What are some facts people may not know about Arabian horses?

Hilary Nixon: "Al Khamsa" is an Arabic term that roughly translates to "the five." Early travelers to the Arabian Peninsula reported that the term "Al Khamsa" was used to designate the five best or favorite breeds. These were the strains or families of the unique and ancient breed of horses native to the Bedouin. The story of "Al Khamsa" refers to the five favorite horses of the prophet Muhammad.

According to this legend, a tribe of Bedouins, after a long journey in the desert, released their mares to run to a watering hole to quench their thirst. As a test of their loyalty, the mares were called back to their masters before reaching the water. Of the many mares, only five returned faithfully without drinking. These became the five original favorite mares of the Bedouin. Each was given a strain name, which would carry on with its descendants.

Hilary Nixon: The Arabian possesses a long-term memory, quick comprehension, alertness, curiosity, resourcefulness and sociability. Centuries of a close relationship with humans have given Arabians a friendly, loyal disposition, marked by a desire to please their master. They enjoy playing with people as much as horses. These horses are adaptable, tractable and intelligent, and they bring a willingness to work, while relishing new challenges. 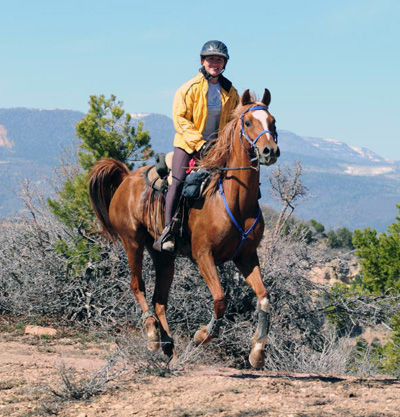 An Arabian competing in an endurance ride / Photo: The Arabian Horse Association

Equitrekking: What style of rider best suits the Arabian horse?

Equitrekking: Has the Arabian horse evolved over time?

Hilary Nixon: The Arabian has changed very little over time. Breeders have worked hard to maintain the original characteristics of the Arabian. Certain trends or traits from popular breeding stock have influenced some aspects of the overall look of the horse. The stamina, soundness, intelligence, beauty, and loyal disposition are still found in Arabians today. 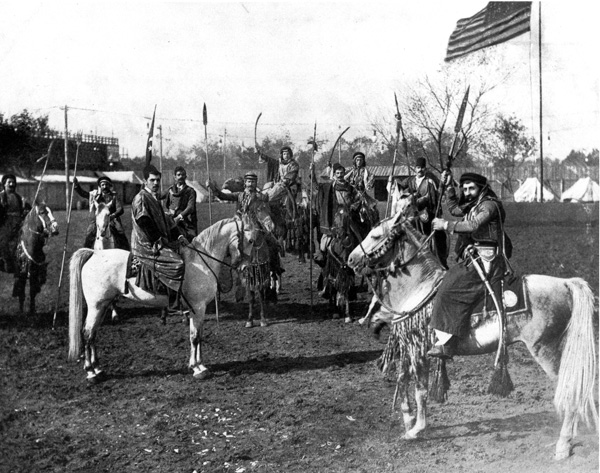 In 1908 The mare Nejdme (left) became the first Arabian horse registered in the United States / Photo: The Arabian Horse Association

Equitrekking: Are there any famous historic Arabian horses?

Hilary Nixon: Many famous people throughout history rode Arabians. Napoleon is said to have ridden some Arabians. It’s been mentioned that their names were “Marengo” and “Wagram.”

A horse named King John appeared in The Scarlett Empress, Lives of a Bengal Lancer, and The Garden of Allah. He was also the model for Prince Charming’s horse in Disney’s animated film Snow White and the Seven Dwarfs.

Equitrekking: What makes the Arabian horse unique as a breed?

Hilary Nixon: Their history, unique ability to bond with humans and intelligence. Of course, their beauty is unique––an arched neck, dished face and high tail carriage makes them aesthetically pleasing. They’ve been an inspiration for many artists over the years.