Founded in 1940, the American Quarter Horse Association is the largest equine breed organization in the world. With headquarters in Amarillo, Texas, AQHA has a membership of more than 280,000 people in 86 countries and has registered more than 5 million horses in 95 countries. Find out if this is the right breed for you.

Raina for Equitrekking: What are the origins of the American Quarter Horse?

AQHA: The origins of the breed can be traced to Colonial America. Our forefathers enjoyed horse racing. In the beginning, they ran the English horses that they rode and plowed with every day.

Soon after, Colonial farmers in Virginia and the Carolinas began to trade with the Chickasaw Indians for a much faster horse. These quick Indian ponies were Spanish Barbs, brought into Florida by early Spanish explorers and colonists. There is evidence that Spanish Barbs obtained from the Chickasaws were crossed with the Colonists’ English stock as early as 1611.

Over the next 150 years, the product of this breeding would come to be known as the “Celebrated American Quarter Running Horse.” By the middle of the 18th century, it was apparent that the Colonists were in America to stay.

Back in England, horse racing was being revolutionized by a stallion known as The Godolphin Arabian. In 1752, John Randolph of Virginia imported a grandson of The Godolphin Arabian, called Janus. When Janus was bred to Colonial mares bearing the blood of the Chickasaw horse, the result was the prototype of the American Quarter Horse. While it cannot be said that Janus founded the breed, it can be argued that he shaped and formed it significantly. “Compactness of form, strength and power” were the traits associated with the get and progeny of Janus.

At the same time Janus’ blood was improving the “short horses,” those which ran the quarter mile, other Colonial horsemen were adopting the English fashion for long-course racing of distance up to four miles.

One other great stallion to put his stamp on the Quarter Horse during this period was Sir Archy, sired by the imported stallion Diomed, and foaled in 1805. Sir Archy’s sons and daughters would be the most important influences in the development of Quarter Horses during the next half century. Steel Dust and Shiloh, foundation stallions of the modern Quarter Horse, trace back to Sir Archy. Two other stallions which would contribute to the short-horse bloodlines around this same time were Printer and Tiger.

The final ingredient to the genetic formula that produced the Quarter Horse was found west of the Mississippi River: the Mustang. A free-roaming, far-ranging wild descendent of the Barb, introduced into the American Southwest by Spanish explorers, missionaries and settlers.

When crossed with the descendants of Janus, Sir Archy, Printer and Tiger, the western Mustang added the last important shot of hybrid vigor to complete the creation of a horse unique to America, the American Quarter Horse. 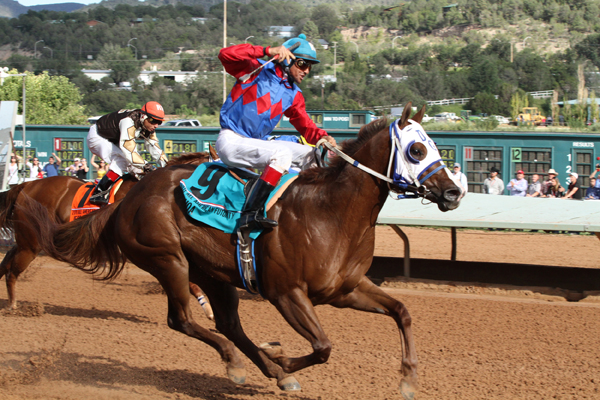 Equitrekking: What are the conformation characteristics of the American Quarter Horse?

These heavily muscled, compact horses could run a short distance over a straightaway faster than any other horse and the fastest were called Celebrated American Quarter Running Horses by English colonists in the 1600s. In 1940 a registry was formed to preserve the breed, which officially became the American Quarter Horse.

Equitrekking: How has the American Quarter Horse been used  throughout history? Has this had an influence on the breed today?

While still a very versatile breed, specialized American Quarter Horses have been bred, such as bloodlines that excel in jumping, racing, western pleasure or reining.

Equitrekking: What are some fun facts people may not know about American Quarter Horses?

AQHA: It’s interesting to note that the quarter-mile is still the most popular distance for racing American Quarter Horse, and the best blaze the 440 yards in 21 seconds or less.

Also, even though America lays claim to the breed, enthusiasts around the world, from Australia to China to Germany, raise and show American Quarter Horses.

Equitrekking: What kind of temperament is this breed best known? What style of rider best suits the American Quarter Horse?

AQHA: Their intelligence, gentle nature and even temperament make them a great horse for new riders learning about horses in addition to experienced riders. The breed is strong, responsive and versatile.

Known for its versatility, the American Quarter Horse breed is enjoyed around the world in nearly every equestrian discipline.

Equitrekking: Has the American Quarter Horse evolved over time?

Equitrekking: Can you tell us some famous historical Quarter Horses?

AQHA: Wimpy P-1, sired by Solis and out of Panda, was born on the King Ranch in South Texas. Wimpy was a grandson of Old Sorrel on both the top and bottom. Old Sorrel was the foundation sire for the famous ranch, and was bred by noted breeder George Clegg.

In 1941, Bob Kleberg decided to show Wimpy in the 1941 Fort Worth Southwestern Exposition & Fat Stock Show. The winner of the stallion class would receive the No. P-1 in AQHA’s first stud book. After winning the class, Wimpy went back to the King Ranch where he sired 174 registered foals.

The chestnut stallion sired sons and daughters that went onto produce AQHA Champions. A few of Wimpy’s better known progeny were Lauro, Silver Wimpy, Wimpy II and Bill Cody. Wimpy was inducted into the American Quarter Horse Hall of Fame in 1989.

Rugged Lark was sired by Really Rugged (TB) and was out of Alisa Lark. Carol Harris of Bo-Bett Farms in Ocala, Florida, bought Rugged Lark as a yearling. The bay stallion’s list of accomplishments include:

Rugged Lark also sired two Superhorses, The Lark Ascending, who won the title in 1991, and Look Whos Larkin, the 1999 Superhorse.

In 1989, Rugged Lark became a model for an extremely popular Breyer collectible horse. Lark was asked to perform at the Volvo World Cup Competition in Tampa, Florida, and at the 1989 Festival of Champions for the United States Equestrian Team. In 1995, Lark performed at the Festival of Champions again and was AQHA’s ambassador to the 1996 Olympics in Atlanta.

The stallion received AQHA’s Silver Spur award in recognition of his efforts as an ambassador and entertainer.

The stallion ran 25 races in three years, crossing the finish line – usually with plenty of daylight to spare – in 21 of them. He finished second three times and did worse than that only once. All this fast footwork earned him $507,688 during his career – years before Quarter Horses were earning million-dollar purses.

You can find more American Quarter horses in the  Hall of Fame Inductees.

Equitrekking: What makes the American Quarter Horse unique as a breed?

For more information about The American Quarter Horse, visit  AQHA