The first day of our pack trip into Banff National Park had been an eventful one. The three-hour ride to Mystic Camp was a mix of sun, rain and hail- yes hail in July!

We were in the Canadian Rockies of Alberta, exploring Banff National Park and filming a horse pack trip for a new episode of Equitrekking. In Banff, as in any mountainous area, layers are essential, because the weather changes quickly, something our entire crew discovered as deep within a forest we were pelted by hail.

We passed through deep forests, teeming with moss, both on the ground and hanging from the branches of tall spruce trees. My horse Tumbleweed drank from cool mountain streams and trotted and walked along the sometimes rocky trails. We passed through forested trails that opened up to reveal dramatic, tall mountain peaks, piercing the sky. 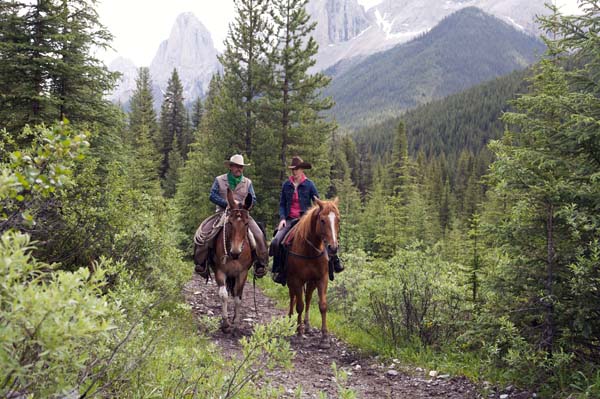 I felt like I was looking at an Ansel Adams photograph, except that I was there, seeing it in color, smelling the forest and rain and hearing the birds.

On the ride to camp, we passed only one other soul, a packer with a string of mules. He was making a supply run for the camp where we were headed. For the most part, we rode in silence-- in a zen like state. We stopped a few times in picturesque areas to film. Tumbleweed, my trusty trail horse, didn’t like being left alone with the mule that Barry, our guide, rode.

Barry’d named her Sharon Stone, because she had attitude and said she was a super smart mule. I don’t think Tumbleweed appreciated her finer qualities. 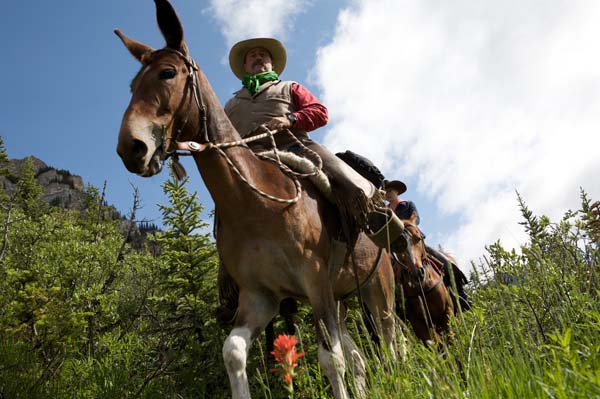 Every time Barry and I tried to ride away from the group, Tumbleweed called out to make sure that the others knew he was nearby. I reassured him with pats and tried to make sure the other horses were in view.

A few times along our ride, Barry pointed out fresh bear scat along the trails, though we don’t see any bears. The bears seemed to be hiding from us, which wasn’t necessarily a bad thing.

The outfitting company with whom we traveled runs three camps in Banff National Park. These camps aren’t just a few small tents in the woods. They are quite intricate logistical operations. 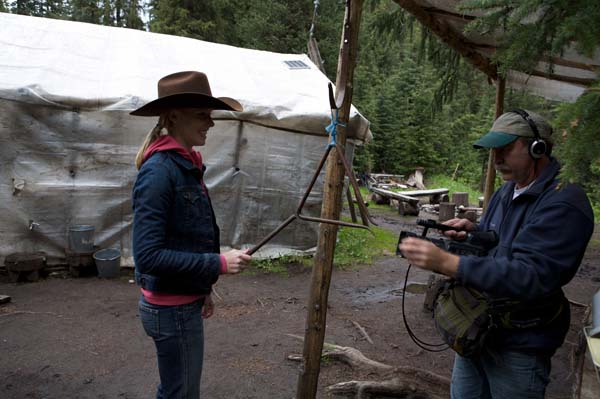 Mystic Camp has a large tack tent, luggage tent, outhouses, a small slew of sleeping tents (tents built on wooden risers, because it rains quite a lot), and a dining tent complete with a wood burning stove (for warmth and where hot water and coffee rest) and even a propane stove.

Imagine the dining tent in the TV series “Mash” and you can maybe imagine these, except they are white canvas.

When we first got to camp, I met Tanya, the cook. She’s got a hard job, living in the woods and cooking for hungry riders. Tanya introduced me to her kitchen, where she cooks up amazing meals like the pancakes, oatmeal, fresh muffins, eggs and sausage that we had for breakfast the next morning. 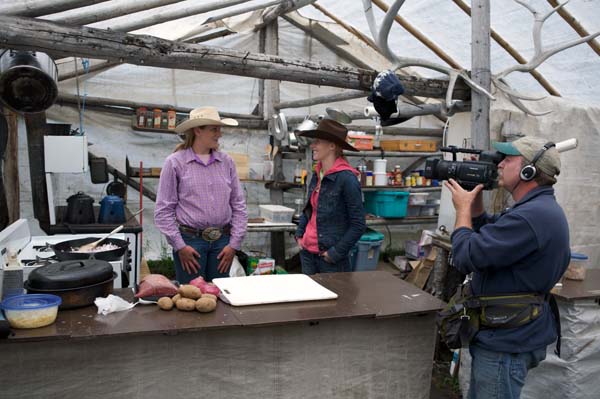 I do admit, clean up is sort of a pain because no electricity means no dishwasher, but the woman’s got a stove! Someone had the tough job of packing that in at some point in the beginning of the summer and someone will pack it out.

Living in the Woods


Tanya told me about her relationship with the folks she calls the “packers.” These are like the truck drivers of the horse world. Their job is to ride a string of horses and mules packed with supplies into camp and then carry out trash or whatever needs to be taken away from camp.

Mystic Camp is the closest camp to civilization and it’s still three hours. Tanya gets her meats and those items that need to stay cold brought in frozen by a packer and she keeps a list for each time he comes to camp. When the frozen foods arrive, she immediately buries them in her insulated ground box to keep them cool for the week. 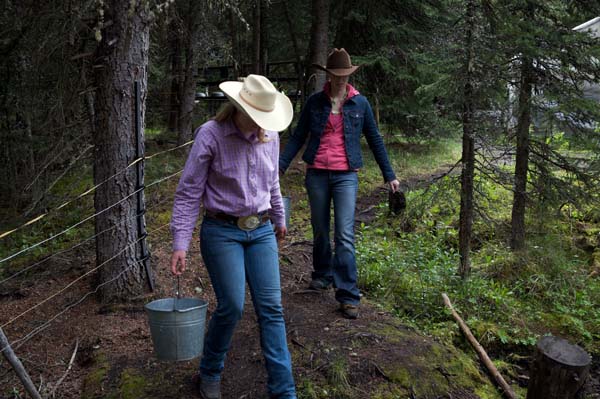 It’s like we’d stepped back in time, as we walked down to the glacial fed stream to get water to clean the potatoes for dinner. Armed with a silver bucket, I made sure not to fall into the chilly waters as I attempted to help Tanya. (Guests don’t have to help with chores, but I wanted to see how the whole camp worked.)

The best part of the meal was the second dessert, when we all sat outside by a fire and roasted s’mores. I hadn’t had s’mores by a fire since I was a kid. They tasted really good. 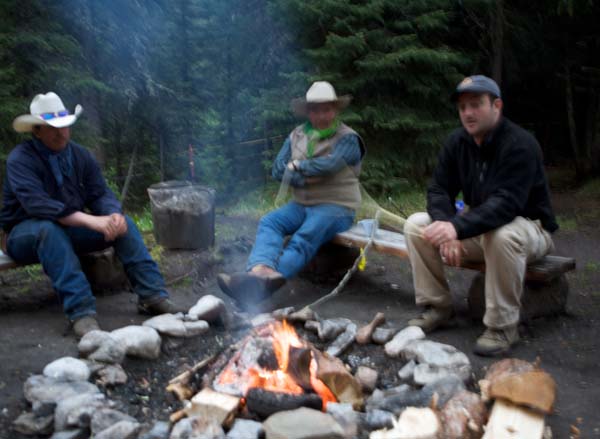 It’s been a while since I’ve been camping. So long, in fact, that I failed to grasp the new camping technology on the first night of our pack trip. As the rain beat on my tent, I tossed and turned, wondering the point of the small, flat bedroll my sleeping bag rested upon. It was dark when I crawled into my tent and used my tiny flashlight to search for bugs, before changing and zipping myself into my sleeping bag.

When the air is crisp outside, it’s good sleeping weather. I was keen to get in my sleeping bag and didn’t take the time to use my flashlight to properly set up my sleeping arrangements. My bedroll could have self-inflated, but I didn’t see that in the dark, so instead of sleeping on cushy air, I was sleeping on a worthless flat bedroll on a hard wooden riser. The next morning, I rose stiffer from the night’s sleep than from the thirty-five miles I had ridden the past two days, so I really enjoyed that morning coffee, which was waiting for me in the kitchen tent.

The second day of our trip was the most beautiful. That’s when we did our ride to Mystic Lake, a beautiful jade green colored glacial fed lake about an hour and a half’s ride from Mystic Camp. 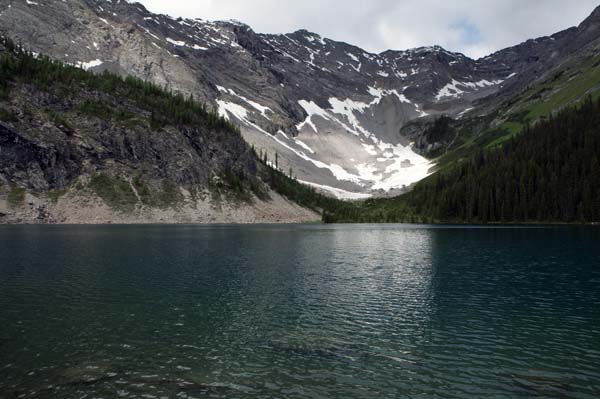 The setting was absolutely pristine and again no one else was anywhere around. Sitting on Tumbleweed at Mystic Lake, I took in the chilly breeze coming off of its waters. It sure was special to be able to gaze at its beautiful, glassy waters, and absorb the wilderness within Banff National Park.

Learn about how you can book the horse riding Banff vacation, which is suitable for beginning and experienced riders, or other horseback riding adventures you've seen on the Equitrekking TV show on Public Television, in the Equitrekking Vacation Guide.