Visiting the Academy of Equestrian Art in Versailles

After spending the morning on horseback galloping through the gardens of the Château of Versailles, my day in search of royal horse experiences would not have been complete without a visit to the Academy of Equestrian Arts or the Académie du Spectacle Equestre Manège de la Grande Ecurie du Château de Versailles, as it is called in French.

The Academy is located just across the main square from the Palace of Versailles and opened in 2003, under the teaching and artistic direction of Bartabas. A display of dressage set to baroque music, the Academy is a unique environment and form of equestrian theater. Bartabas is also known for Zingaro, his equestrian theater started in 1985. 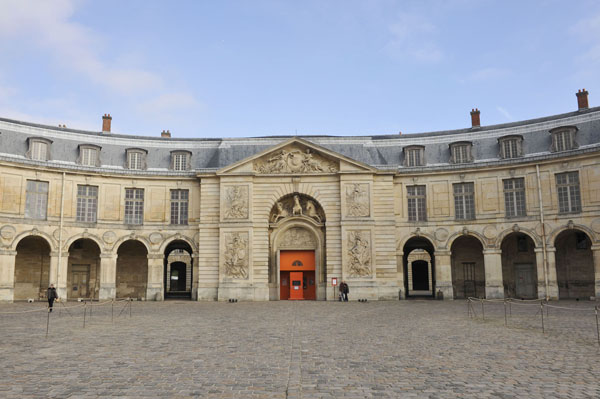 Jules Hardouin-Mansart, the architect who designed all the extensions and rebuilds at Versailles, also designed the two twin buildings (shown below) to shelter King Louis XIV’s 600 horses.

Today it is the home of the Academy. The Academy uses Lusitano horses from Portugal, known for their beauty, performance and leaning capacity. “They are the same breed that was the glory of Versailles in the 18th century.” Other breeds, such as the Argentine Criollos, are used by the Academy for horseback fencing. 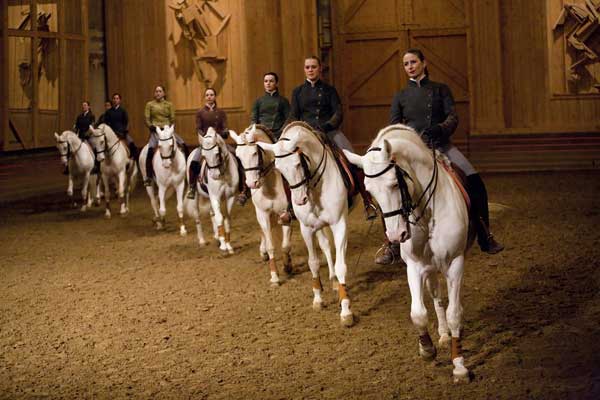 The Academy states that "horsemanship is the principle art linked with dance, music, and acrobatics" and says that it's the first school where these other arts share the limelight with horseback riding.

Bartabas' idea for this school originated with classical 18th century riding, where skills and traditions were more concentrated with grace and elegance. Song, dance, artistic fencing, and visual arts are the main subjects, linking classical traditions all closely related to the artistic training with the horse.

“Singing brings self assurance, dance helps you to know your body and control your movement, artistic fencing trains your reflexes, and visual arts help you develop space and perception and insight into the horse’s movement”, say The Academy and Bartabas.

The Grand Arena (below) was designed by Patrick Bouchain who also designed the Stables for the Academy. We were told that the arena is available to rent for galas and dinners. Certainly, it's not suited for the average person’s budget, but what a great event to get an invite! 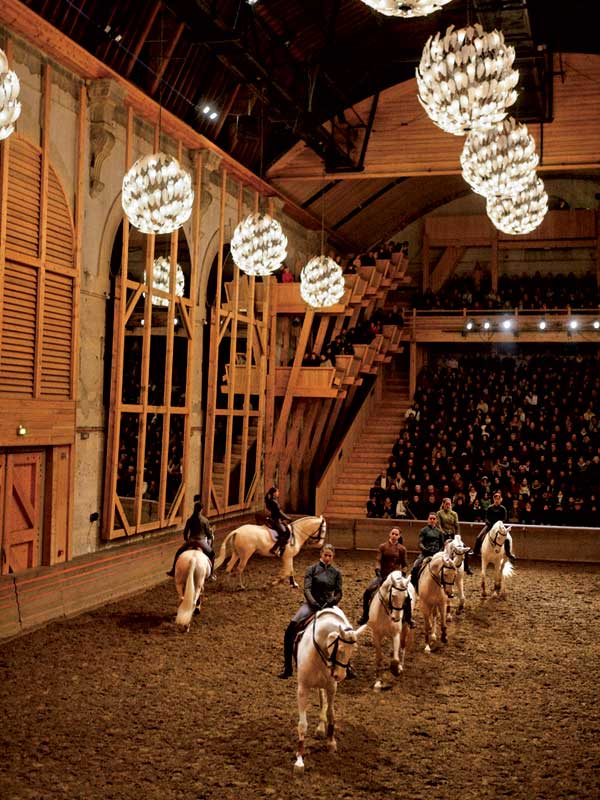 While touring the Great Stables or Grand Ecuries, it was clear that these horses received the royal treatment.

We all laughed when Marine Poncet, the Director of Sales and our tour guide, said that these stables were the equivalent of a five star hotel for horses, currently housing thirty lucky steeds.

The Great Stables are noted for their scale and architecture. In the 18th century, the stables housed the King’s horses as well as the royal riding academy called the Ecoles des Pages -- an environment truly set for a king, or the kings’ horses.

There are currently three permanent riders and eight students. Once a student is selected, there is no time limit on how long he can stay with the school. Typically the students are each assigned five horses and spend mornings training their mounts individually. Afternoons are spent in the classroom, moving between fencing and singing coaches, then returning in the early evening to once again train with the horses.

The academy allows the public to view scheduled morning training sessions as well as a few evening "shows" that combine all of the elements, displaying everything that is studied at the academy. 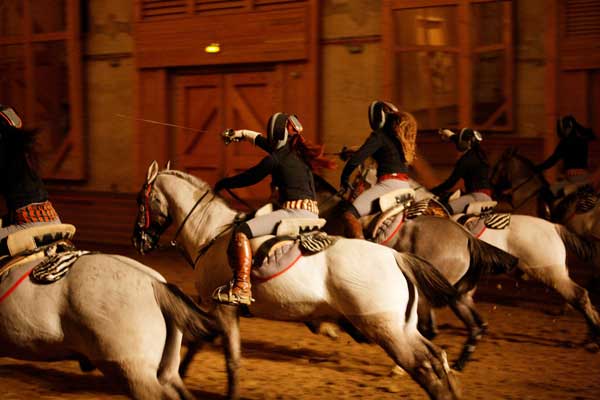 Before you start to wonder how a six day schedule can result in royal treatment, both horse and rider benefit from the relationship they develop together, not to mention the Academy's relationship with Hermes, which has provided the Academy’s horses with a custom saddle, designed in the baroque traditions. 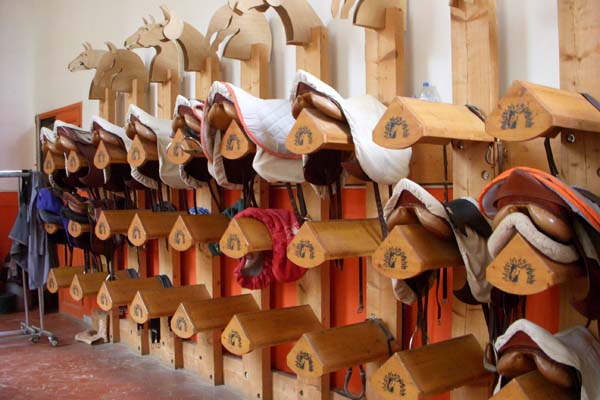 Our tour took us to the tack room to see these very saddles. Inside there is a display of a real horse skeleton. The academy has its own orthopedic specialist who provides the riders with special lessons on the horse and provides the horses with care as needed. 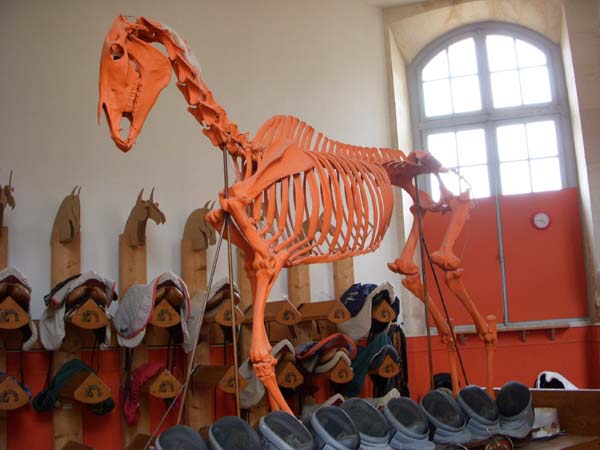 As we exited to the courtyard, we were able to see the students training. To our surprise, we were also privileged to a rare sighting of Bartabas himself, the creator and director of the academy, discretely standing in the center of the circle the horses and riders had formed.

Below is also an official photo showing exactly what we witnessed in the courtyard. 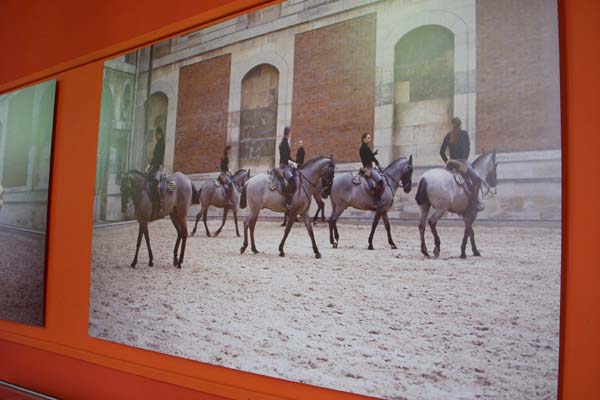 How You Can Go

The Academy is open to the public several times a week during select times, depending on the season. A visit to the Ecuries or stables is included with the show after the performance. The Academy additionally travels to various areas of France to perform this unique Equestrian Theater, incorporating all of the subjects from singing to fencing into the show.

Photos courtesy of The Academy and taken by © Agathe Poupeney, © Antoine Poupel

A special thanks to Marine Ponet for her time and the opportunity to take you behind the scenes of the Academy of Equestrian Arts!