A Trip to the Icelandic Horse World Championships

Our first trip to the Icelandic Horse World Championships in the summer of 2013 won’t be our last. We had booked the trip several months in advance, but as time progressed we were having second thoughts. Going to Berlin for the ‘WCs’ meant that we wouldn’t be going to Iceland again this year, and we had had such a fantastic time in October on the Round Up, that we wanted to go straight back! 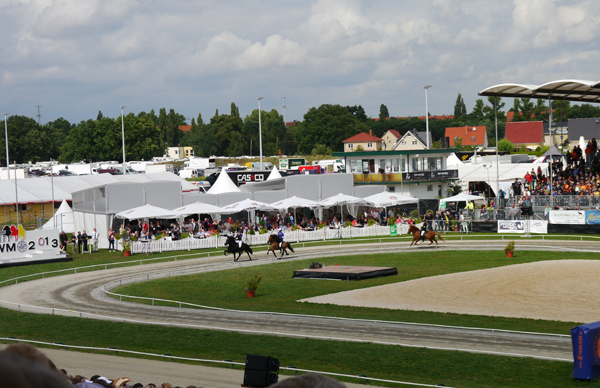 But, we were already committed. Tickets, hotel and flight were all paid for well in advance. The arrangements had been made following an invitation on Facebook from another Icelandic horse owner, and despite only having met her once, and never having met any of the others in the group of ten, we signed up. At this point we did not really know that many ‘Icey’ people, had not been to any shows or clinics in the UK, and therefore didn’t know what we had let ourselves in for! Fortunately, we got to meet some more people at the British Championships, at a clinic run locally, and a Horse Agility Event for Icelandic’s, before heading off to Berlin.

Everyone was really friendly and welcoming, and in the final weeks we began to get more excited about the trip, and made a long shopping list of all the horsey things we wanted to buy while we were there!

We arrived on the Tuesday, a few days into the show. I won’t dwell on the location of the hotel which was, at best described as “edgy”. Suffice to say that once we had established where to buy supplies of water (or beer), snacks and salads for lunches, and which train to get for the fifteen minute journey to the show ground, we were happy.

Most of the “old hands” headed off to explore Berlin, or get some rest before the next day, but Roger and I couldn’t wait to get to the show even though it was late in the day. I am glad we did. It gave us an opportunity while it was quiet to locate our seats and explore the grounds. Basically that meant finding out where the best stands were in the shopping area, and seeing some horses. We were already having equine withdrawal symptoms since leaving our little herd the day before. 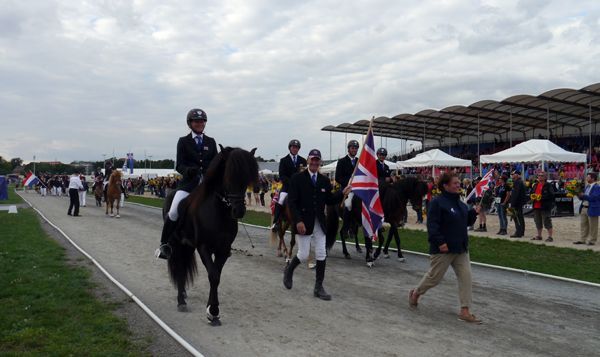 The British team at the Icelandic Horse World Championships.

Early in the week there are not as many people about, so basically you can sit anywhere. We were able to sit near the front to watch the Mares Breeding Assessment, and enjoyed it more than we expected to. The young mares were graded for their confirmation, and the scores announced as they came in to show off their gaits. It was really helpful in helping us understand what was being looked for in each of the gaits, and we got so see a lot of horses, several of whom we would have liked to have brought home!

We also really enjoyed the Pace Test, and the Pace Racing, and it was great to be able to cheer for the British riders in these events. I think Fleygur from Siamber Wen should be worried, as Roger definitely has his eye on these events!

In the days that followed we watched the early rounds of each of the classes and very quickly became experts in which gaits were the best. It was good to be able to sit with members of the British Team for some of this, as well as other supporters, and learn from their experience and expertise.

The last couple of days of the show were certainly exciting, with the finals in each of the classes, but actually we found some of the earlier events more impressive and memorable. The horses and riders compete individually in the earlier rounds allowing you, and the judges, I imagine, to focus properly on the performance of each partnership, and they get to choose their own music. I know that many people felt that the Icelandic rider who rode to “First we take Manhattan then, we take Berlin…” was arrogant, but there was no doubting it was a powerful performance, and it is true, it would have seemed supremely arrogant if he hadn’t won, but he did! For me though, the most impressive performance was from Magnus Skulason, in the Five Gait, whose transitions were amazingly smooth, almost breathtaking.

It was great fun. As was Connie who has somehow managed to teach her Icelandic to hula-hoop! 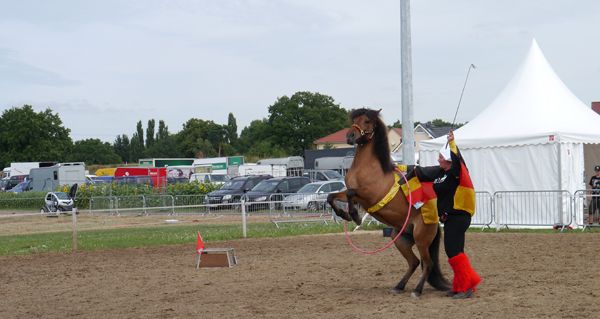 The Icelandic horse is hardy, and long lived, and it was moving to see so many twenty year old plus horses in the “old heroes” display, and although one or two looked as if they may have been better off staying in the paddock, most were impressively fit, and a great advert for the breed.

Another highlight for Roger and me was meeting so many people we knew. We met up with people who had been on the Round Up with us in Iceland last year, and with a number of the staff from Islandshestar who had organized the trip; and a couple of the horse farmers/breeders whose horses we had ridden. Roger, who has a great memory for faces, also made sure we had a long talk with the guy from the movie “Kraftur” and talked saddles with Benni. For those who have been around a long time, and know “everyone” this is probably normal, but for us it was like meeting all our favorite celebrities all at once!

A video from the World Championships in Berlin. See these horses tolting in theT1 Finals!

Having said that I am not sure I will forgive Fannar, the MD of Islandshestar for setting us up to be interviewed on Icelandic TV so that the whole of Iceland could laugh at our attempts at pronouncing Icelandic Horse names. It was slightly surreal to get a message on Little Viking Horses Facebook page the next day, from a fan in Iceland saying she had seen “My Mate Roger” on Icelandic TV!

I can’t say the closing ceremony was particularly impressive, and it did drag on a bit, but I am glad we stayed right to the end and that I got to run down onto the track to grab a picture of most of the British Team. I think they had had a tough week (flash flood in the campsite, injuries and a disqualification!), but they were all smiling at the end. 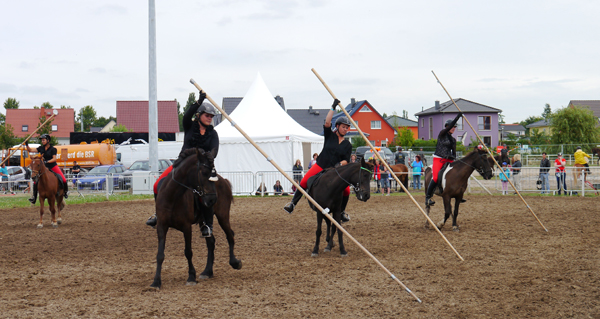 Riders show off the versatility of the Icelandic horse.

A final thought. When we got home, Roger and I put on some DVDs we have of Icelandic competitions, some of which were over ten years old. We were struck by how much the riding has improved. In all competition, and equestrian sport is no different, there is a risk of using extreme measures to win. Sadly, for horses this can mean poor riding, or inhumane methods. I hope that we continue to see improvements in the training and riding of Icelandic horses, and that judges remember to reward the spirit and free flow of the Icelandic horse–– and don’t just score highly the flamboyant or extravagant, at the expense of the function of the gait, or the welfare of the horse.

The majority of what we saw in Berlin was good riding, beautiful horses, and friendly people, but with hindsight, and I little bit more knowledge, I now see that some of what looked impressed at the time would not meet the criteria I set out above, and arguably should not have been scored as highly as it was. This is an issue that needs more debate in the Icelandic horse community, and in equestrian sport in general.

At the end I was struck by what a small world it is, and how the Icelandic horse is uniting people in many countries. The next World Championships is in Denmark in 2015. We intend to be there.


How you can go:  The Icelandic Horse World Championships will be held at Landsskuepladsen in Herning, Denmark in 2015. Learn more on the website. Learn about horseback riding tours in Iceland with Islandshestar and other great Iceland riding vacations in the Equitrekking Vacation Guide.

About Author Catherine Holland: I live in Shropshire, England, with my husband, Roger. I am a full time Chief Executive, but spend most of my free time riding our horses. Aged 51, I have loved horses for as long as I can remember, and have tried to find a ride in every part of the world I have visited. In Iceland, I fell in love with the country and it’s horses. Just for fun, and to promote the Icelandic horse, I write a blog called Little Viking Horse.