A $750 T-bred, off the track for just four years, has qualified to compete at the preeminent Rolex Kentucky Three Day.

AP Prime, grandson of the great A.P. Indy, and his owner/rider Leah Lang-Gluscic rode their hearts out at Fair Hill last, despite being halted twice on course while injured riders were tended to.

It was amazing to Lang-Gluscic that he was able to pull himself up from a hell bent dash over the challenging course, that twice had fallen riders ahead of them and caused the event to be momentarily halted. 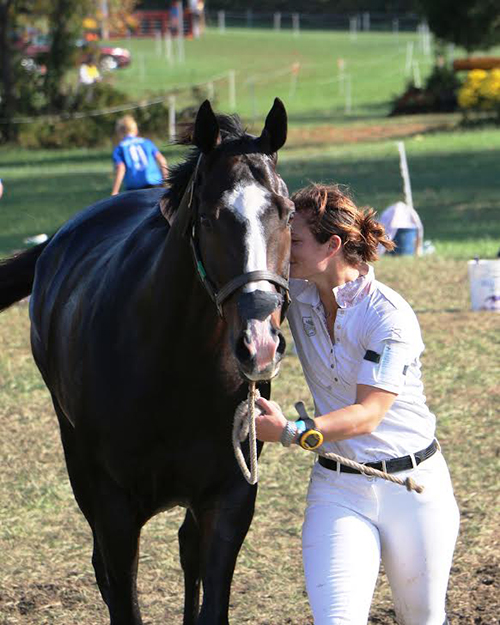 What a test! AP Prime and Leah Lang-Gluscic finish the cross-country course at Fair Hill after being halted twice for fallen riders.

“AP was so professional! This was our first hold on course ever. It happened right after Fence 8, but I wasn’t worried, because the next fence was a big and inviting, and easy to re-start the course with,” she says.

It got worse. “Then, after we got through with Jumps 9 and 10, we came flying up a huge hill and saw the huge blue tarps ahead, surrounding Fence 11."

“When you see the blue tarps, that means something horrible has happened,” she says of the time-honored way of shielding the public’s view.

Her heart hammering as she fought to rein in her ex-racehorse, and Lang-Gluscic was “very upset” until she was reassured that the fallen horse/rider team were not badly injured. And she kept AP walking and calm until she was given her third “Go!” signal of the day.

“When we got the signal to again, I was a little nervous. Jump 11 is a huge Trakehner, and it goes right up the hill to a Coffin, which is notorious at Fair Hill for being difficult,” she says. “But AP was amazing! We went right over it and finished the ride!”

Although they ended with a time penalty, Lang-Gluscic says AP did an extraordinary job stopping and restarting the course twice, and jumping clean and willingly. “This is a difficult course designed by the same course designers at Rolex. A lot of people had time penalties and refusals. But AP went clean and very bold.” 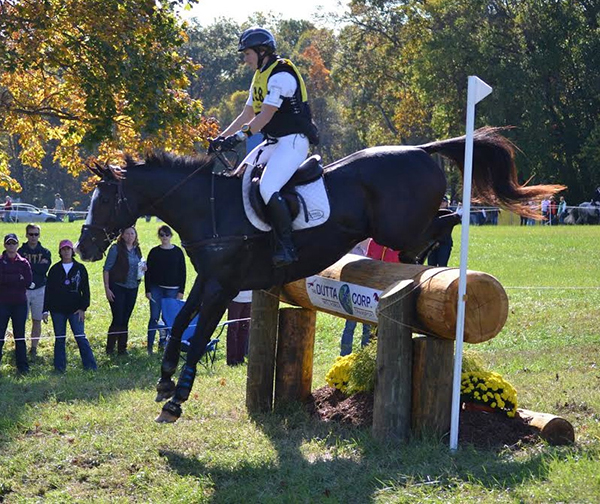 The Fair Hill course wound up testing everything they had.

In the show jumping round the next day, though they had three rails, two were her fault—she rushed him past the distance and he caught them with his hind feet—and a third was a fluke. “When I got him into a good quality canter, he jumped his heart out and went perfectly. I need to get my eye a little more patient by Kentucky, and I think we can be competitive there.”

With the tests of Fair Hill behind them, AP Prime will relax on a six-week vacation before heading to Ocala, Fla. for the winter. “He’ll get fuzzy, he’ll get fat, and he’ll be happy,” she says. “Then we’ll do two advanced level horse trials, shorter ones, and we’ll be on target for Rolex!”

About the author: Susan Salk is the creator of Off-Track Thoroughbreds, a blog dedicated to telling Success Stories of off-track Thoroughbreds who transition into next careers, or retirement. Please consider visiting the blog’s new store, Off-Track Products. Proceeds will help sustain this blog in the future, and go to charity.