Saddle up on a trail ride in Bryce Canyon

I had heard that Bryce Canyon National Park was one of the best parks in America. Having gone to some pretty spectacular ones, including Yellowstone and Haleakala, I was excited to take on Bryce and wasn’t let down by the ride.

We were blessed with blue skies, as I mounted “The Kid,” a 10-year-old black Quarter Horse Thoroughbred Cross. The Kid was a great partner for my ride. Tawn, of Canyon Trail Rides, guided me on his horse Wiggy. 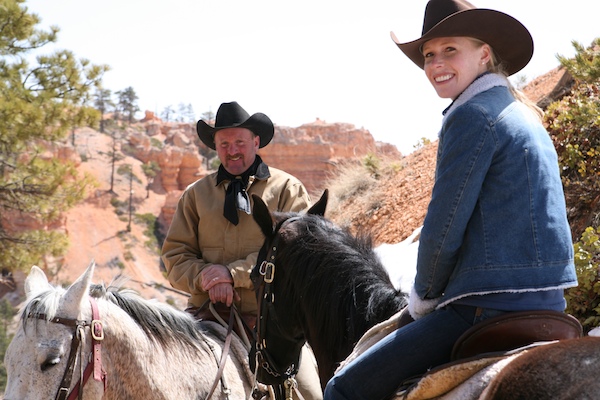 Tawn said that a lot of people get nervous as they begin their descent into the canyon, because of the drop off on the other side of the trail. I felt safe on The Kid, as he had ridden this trail a thousand times and was probably more sure-footed than I would have been on foot. What makes Bryce unique, are these stunning rock spire formations, called Hoodoos, which were sprinkled with a frosting of snow as we make our way further along the trail.

Tawn has been riding in the park for over 30 years. Though he rides there all of the time, he says he doesn’t get tired of it, because it is constantly changing. 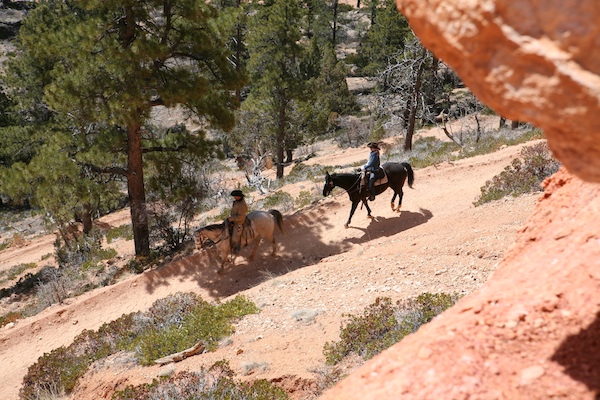 We continued down the semi steep trail into Bryce, stopping to look at what Tawn called “boat mesa” in the distance. This huge canyon looked more like a battleship to me. Everything in Utah is on a grand scale. Snow covered mountains, hoodoos, vast pastures, red canyons… it’s all big and dramatic.

My favorite part of the ride, was the viewpoint for the Queen’s Garden. This impressive area of hoodoos is said to be watched over by Queen Victoria, whose face appears in the rocks. 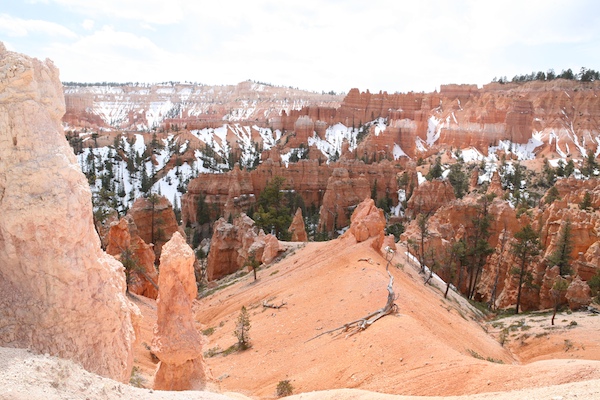 The snow-covered hoodoos were all around us here, and I felt like I could sit with Kid for quite a while, letting my imagination pick out various images and shapes within the rocks. The Paiute Native Americans believed that these hoodoos were people who had been turned to stone. Other park visitors in years past, including Ebenezer Bryce, for whom the canyon is named, marveled at the maze-like qualities of the hoodoos. Throughout our ride in Bryce, Tawn pointed out shapes that he saw in the hoodoos and I simply marveled at being there, surrounded by these amazing rock formations on a great horse named The Kid.

Darley Newman is the host of the Emmy Award-winning Public Television series Equitrekking®, which takes viewers on horseback riding vacations around the world. Equitrekking is broadcast on PBS stations and on international networks.