Riding Down the Rabbit Trail and Memory Lane in Shenandoah County!

Recently, members of the Shenandoah Trail Riders and Horseman's Association enjoyed a beautiful spring day trail riding in Shenandoah County through a portion of the George Washington National Forest. Splashes of purple painted the forested landscape from the red-bud trees, a distant subspecies of Virginia's designated state tree, the Dogwood, which has white blooms. 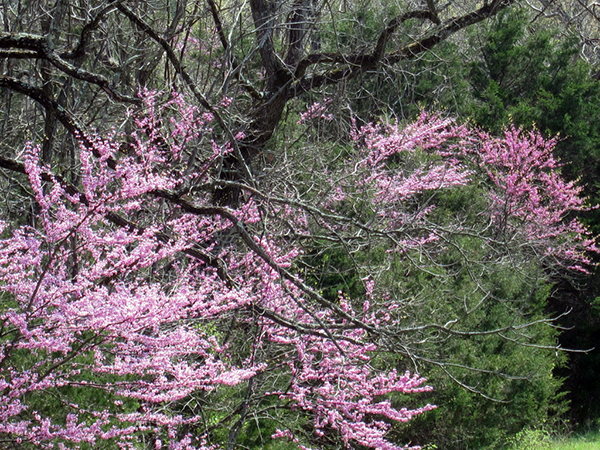 While this day happened to be Easter Sunday, it did not stop the “Easter Bunny” from taking a break and joining the ride down the rabbit trail with a bedecked purple cowgal hat! 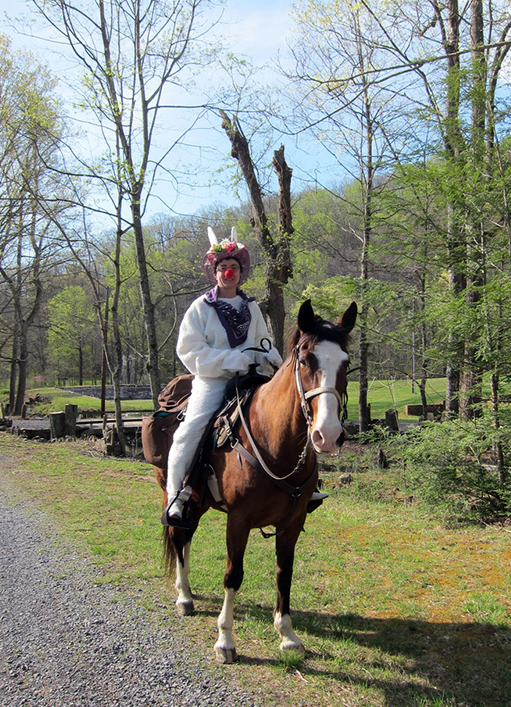 The George Washington National Forest covers a large area along the Appalachian Mountains situated along the western part of Virginia and into West Virginia as well as connecting to the Jefferson National Forest on the southern end of the Shenandoah Valley. This mountain range is also found between the Allegheny Mountains to the west and the Blue Ridge Mountains to the east, running along the Interstate 81 corridor. Needless to say, the area has very many beautiful and scenic mountain vistas, and STRHA riders frequent the numerous trails that the GWNF has to offer. 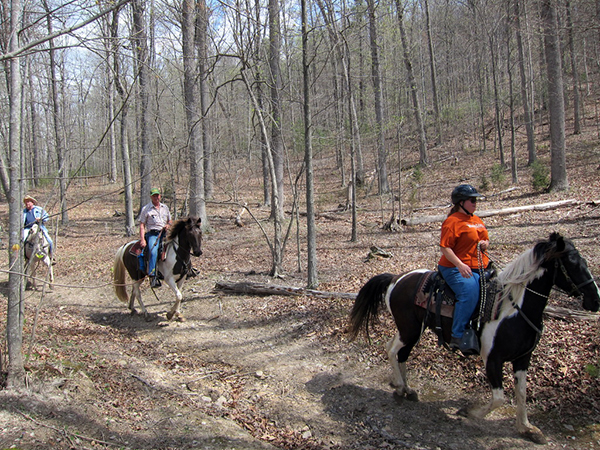 The far-reaching views of the valley once you reach the top of the mountains are magnificent. However, these trails are not for the faint-hearted and horses should be well-shod as the trails are very rocky. STRHA maintains a relationship with the George Washington National Forestry Department regional office (Lee Ranger District) located in Edinburg, VA and has helped maintain trails and parking lots over the years with them.

There is primitive camping available within the forest. Most accessibility is through gravel roads leading to trail heads and most trailer parking areas are not very large. The Lee Ranger District of the George Washington National Forest has trail maps and information of the area. They may be contacted at: 95 Railroad Ave., Edinburg, VA 22824 telephone: (540)984-4101 or visit the forestry website at: http://www.fs.usda.gov/gwj for further information about the area. 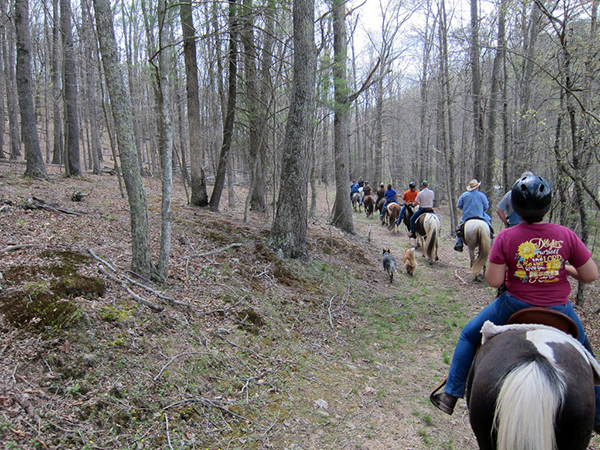 In addition, trail riding in outlying areas off the beaten path can bring you back in time when life was simple. On this particular day, through a private treaty, we were able to enjoy a picnic lunch after our trail ride at what used to be known as “Uncle Tom's Park” in Jerome, VA. Back in the 1930's, Thomas Miller purchased 85 acres and had a dream of establishing the property into a family park. A large swimming pool was built, utilizing spring-fed water. Visitors to the pool recall the water being very cold, but refreshing on hot summer days. This was probably the first of its kind for this area as there were no town or county parks in existence at that time. 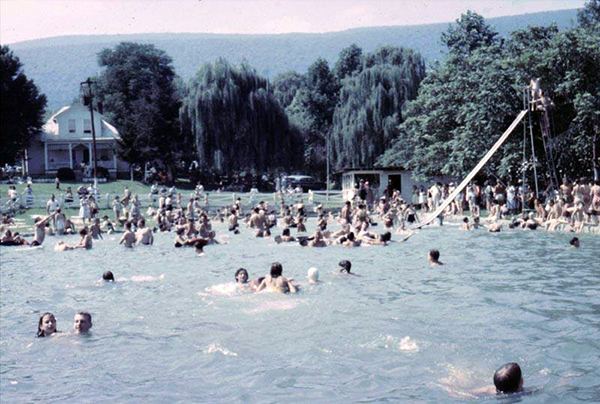 Now the pool is all but a shadow of its former self with rusty pool ladders and weeds growing thru the decaying concrete walls and floors. 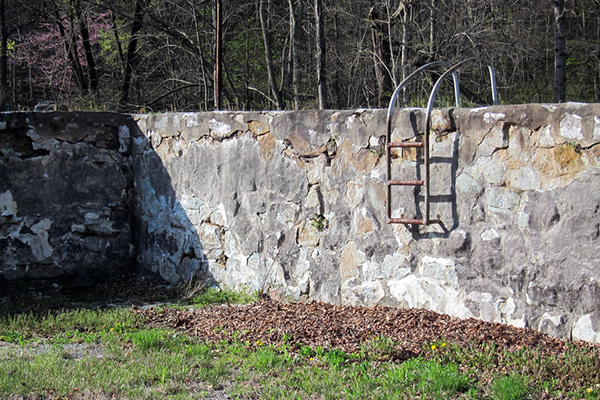 In its heyday, the park would be filled with families picnicking and swimming on the weekends. An old entrance sign to the park salvaged reads “10 cents per car”. A dance hall was built and it became a hip-hopping place for entertainment on Saturday nights. Rumor has it that the legendary Roy Clark (aka “Grandpa Jones” from the television show, “HeeHaw”) began his country singing career as one of the entertainers at “Uncle Toms Park”. There may very well be truth in this, as Roy Clark lived in Meherin, VA which was a couple hours south of this area. During this time, it was remembered that Howard Miller, son of Thomas Miller who helped build and run the park, became known as “Uncle Tom”, walked around with a small notepad in his pocket and that is where he recorded the events booked at the park – a practice much different from our current electronic procedures. 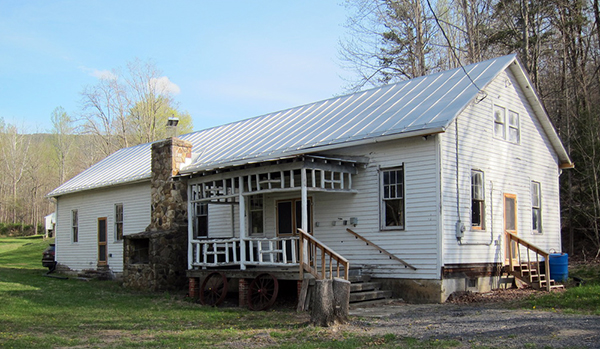 Eight cabins dotted the property for weekend camping getaways as well. A few of the cabins are still privately utilized today as hunting cabins during the hunting season. 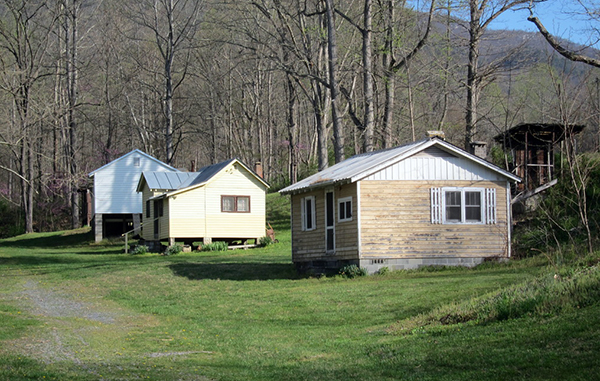 The picnic tables, made of concrete, sit under trees alongside a small creek and have withstood the test of time. Luckily for us, we are able to still enjoy our picnic lunch at these tables. 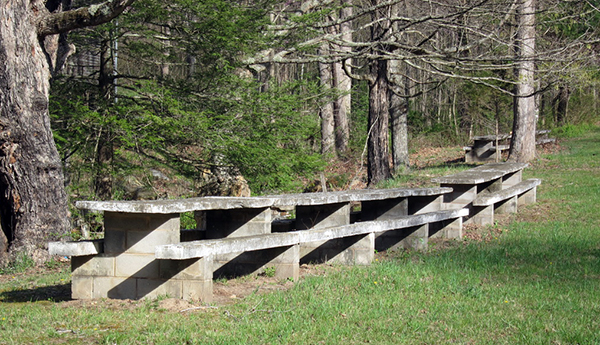 One of our older trail riders has fond memories coming to the park as a child with his family for picnics. As a teenager, he came swimming here and lost his high school ring. Not too long ago, it was returned to him by someone who had been metal detecting around the area.

Uncle Toms Park existed until the mid-1970's when new town and county parks began to be built closer to the town populations. In addition, as new regulations came about, it made it more difficult to continue running a privately owned but public facility, thereby forcing its closure. However, many local senior residents fondly remember the fun they had with their families and friends at Uncle Toms Park.

As the years go by, and changes occur, some things remain certain. Nature's beautiful landscapes never cease to amaze us, whether it is in Shenandoah County, Virginia or elsewhere. Furthermore, once a trail rider, always a trail rider.


About the Author: Susan St. Amand is a Board Member of the Shenandoah Trail Riding and Horseman's Association and employed with the Virginia Cooperative Extension as a 4-H Youth Program Assistant. She grew up in Northern Maine with horses on a farm and has been a transplant to Virginia for the past 25 years. She enjoys planning horse vacations with friends and has currently completed many rides in Maine, Pennsylvania, New York, West Virginia, Tennessee, North Carolina, as well as Virginia, trailering her own horse.