The Equestrian Vagabond rides Gaited Horses in the Lusk Creek Wilderness in Illinois with some 'Gaiter' friends.

Article by Merri Melde
Photos of Merri by Genie Stewart-Spears

The Shawnee National Forest in southern Illinois might look flat and boring from above (like from a Cessna 402 flying 5000' above the ground) but hiding beneath the canopy are trails through winding canyons over some challenging terrain, with hidden caves and sinkholes, sandstone bluffs and cliffs, and mazes of boulders. 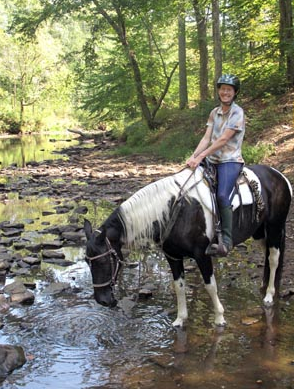 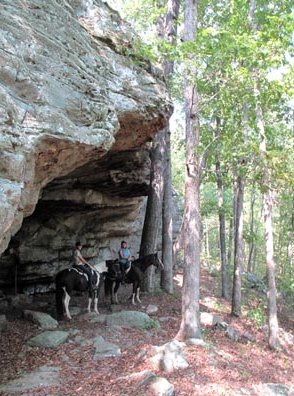 Equine journalist and photographer Genie Stewart-Spears from Illinois and her friend Chris took me out for a ride on Chris' gaited horses. Chris and I rode Spotted Saddle horses, and Genie rode a Racking horse. They wanted to show off their riding grounds–– the hidden gem that is the Shawnee National Forest. 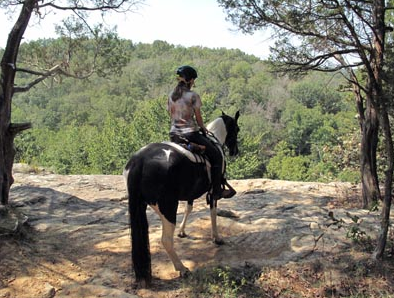 We rode in the Lusk Creek Wilderness, over 6000 road-less acres of the Shawnee National Forest, dominated by oak, beech, hickory and maple trees. Lusk Creek runs year-round and keeps fishermen busy angling for bass and bluegill. 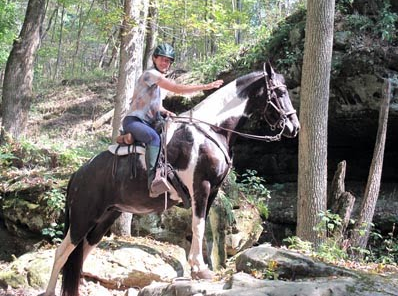 Native American activity dates back up to 10,000 years in this area. The 160-mile River to River Trail, completed in 1996, passes through here, connecting the Ohio River to the Mississippi River. The numerous horse camps are privately owned on property bordering the forest. Places to highline your horses for a picnic or to hike to scenic overlooks are maintained by the Forest Service and volunteers. 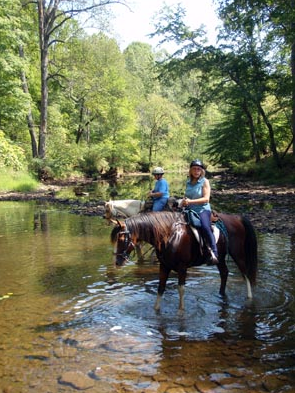 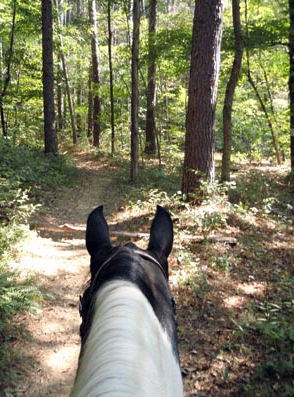 And what better way to see the rugged trails than from the back of a ground-covering, sure-footed Spotted Saddle horse. Chris said that during the Second World War, spotted ponies were bred to Tennessee Walkers to get colored horses that were gaited. Once the color was established, breeders started breeding for a bigger sized horse, introducing other gaited breeds - Missouri Fox Trotters, Racking horses, Peruvian Pasos and Paso Finos. There are two breed registries now for the Spotted Saddle horse, established in 1979 and 1985. 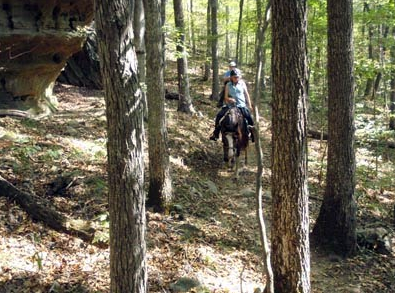 My horse Kate hadn't been out on the trails a whole lot yet, but she was very sure footed, sensible, very forward and willing, and a blast to ride. She paced (as opposed to a trot, both legs on the same side move at the same time) which produces a side to side rocking motion. It wasn't uncomfortable until she got going real fast - then neither she nor I were quite sure exactly what her legs were doing down there. But she still glided right along - a "glide ride" as Genie called it. 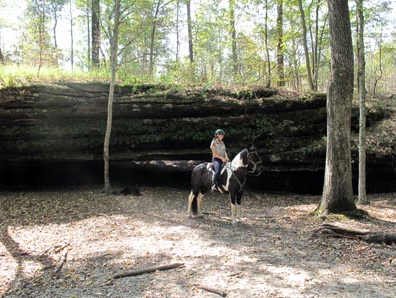 It was such a treat riding a gaited horse in this richly botanical, geological, and cultural National Forest Wilderness–– could I become a Gaiter one of these days...?


How you can go: More information on horse camping and riding in the Shawnee National Forest.

About the author: Merri Melde is a professional horse photographer, writer, rider, and traveler, with a passion for endurance riding that borders on obsession. Her equine photography and adventures from around the world can be seen at TheEquestrianVagabond.com and on her blog at theequestrianvagabond.blogspot.com.