The Horses of the Caisson Stable… Honoring Those Who Served

My 6 AM arrival seemed painfully early, but this was the army, and everyone had already reported for duty at the Caisson stables by 4:00. Eight military funerals are scheduled today, and the soldiers of the elite Caisson platoon at the Ft. Myer army base in Arlington, Virginia are focused on the chores of preparing 14 horses for their workday. The white team of 7 draft mix and Percheron horses are drying in the washroom as the first rays of morning sun warm the historic stable. 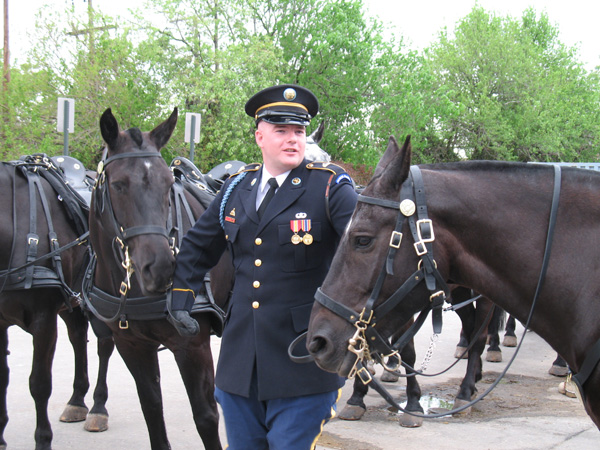 Soon the black team will be led to the stalls for bathing. A group of soldiers are focused on spit-shining tack, mucking stalls, and hosing down the worn brick floors of the century old barn. There is a solemn reverenance in the air, for the task ahead is of great magnitude; laying soldiers to rest in full honor military tradition at Arlington National Cemetery.

The televised funerals of Presidents Kennedy and Reagan have given fame to the U.S. Army's 3rd Infantry Regiment, the oldest active regiment in the United States. Created in 1784, the Old Guard as its known is charged with overseeing diplomatic visits and maintaining the perpetual guard at the Tomb of the Unknown Soldier. But the Old Guard is probably best known for its elegant equestrian presence at presidential funerals; magnificently matched horses drawing a black caisson wagon, cradling a flag draped casket, a restless riderless horse prancing proudly behind the procession.

Sergeant Stephen Cava is my guide at the stables, a tall affable soldier in his mid-twenties, who had the honor of riding in President Reagan's funeral. He is from New Jersey, and like most of the riders in the Caisson platoon, had little riding experience before joining the army. 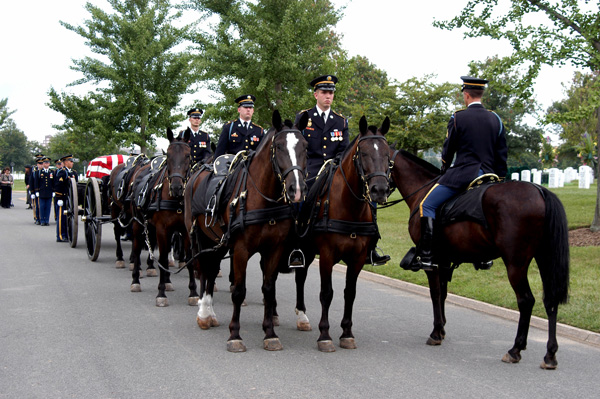 Volunteers for the Caisson platoon need to be soldiers first, says Cava. We prefer that they have no riding experience. We put each solider through an intense ten week training course. Training begins on the ground learning how to groom and clean stalls. Next the soldiers tackle classes on general horse care, vet tech and farrier subjects, equine anatomy, and the history of the platoon, all before anyone gets on a horse.

Each bi-annual class trains 10-15 people for the platoon. There are currently 51 soldiers who rotate between taking care of the horses, stable duty, funeral riding duty and guardians of the Tomb of the Unknowns. The horses are rotated as well. They pull the caissons at Arlington for a week; spend a week in the stalls with exercise, and then a week in the pastures at Fort Belvoir in Virginia.

Although new soldiers learn to ride in western saddles, Caisson platoon soldiers ride in McClellan saddles, the design dating from the civil war. The split seat saddle hardly looks comfortable for long hours on the battlefield. "The saddle," explained one soldier, "is more comfortable for the horse, less so for the rider." 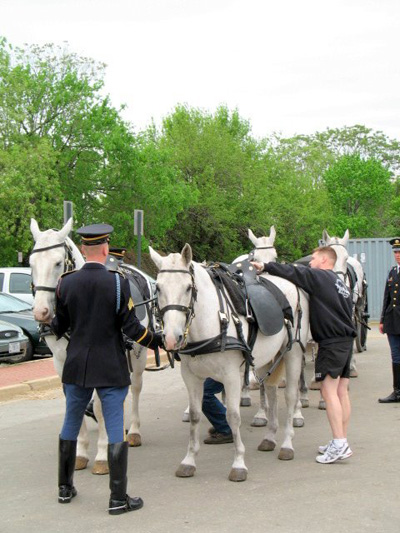 The field artillery harness design originates from the 1890's. Old manuals from the U.S. Army Quartermaster Corps give detailed diagrams of all tack and their traditions. Strict adherence to these details is maintained by Mr. Eugene Berks, who has served as saddle maker for the Caisson Platoon since 1981.

Caisson stable Chief Jeremy Light and his head horse trainer are heading out to the mid-west to look at a couple of replacement horses for the team. Most of the horses are draft and thoroughbred mixes. There are two Percherons on the white team, but they are bigger than the rest of that team making the tack problematic. The trainers are looking to keep the horse team at 16 hands for future additions. There are currently 48 horses in the herd, one new and two pending retirement.

Equestrian military funerals are not reserved only for presidents. Almost 1700 funerals are performed each year. That adds up to a lot of horse hazards and weather conditions. The horses are trained for most situations; umbrellas, flags, helicopters, military bands, vehicular traffic and of course cannons. 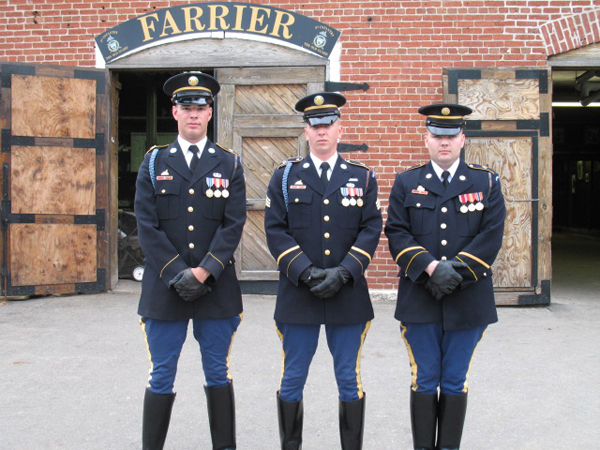 "We start out shooting blanks from hand guns to get them used to the noise" says Cava. "Next we shoot air guns that simulate the noise from cannons. Of course what spooks the horses most are plastic bags and tarps blowing in the wind," he shrugs with a smile.

Suddenly as on cue the atmosphere in the barn electrifies. Soldiers previously sporting desert army fatigues emerge in full military dress. The horses are saddled, the black caissons rolled out, a group of soldiers begins the chore of hooking up the team.

The white team is hitched first. The first two horses in the team are called the "lead" horses; the middle two "swing" and the horses closest to the caisson are the "wheel" horses. The most experienced riders are the wheel riders, as the caissons have no breaks. Caissons date back to the time of field artillery in the eighteenth century. Historically, the caissons carried re-supply weapons onto the battlefield. After unloading, the wagons returned with wounded, dead or dying soldiers. It is from this tradition that the caisson came into use for the burial of a single fallen solider to his or her final resting place. The caissons used today date from 1918 and have been re-fitted to carry flag-draped caskets. They gleam like they are brand new.

There are six horses hitched to the caisson and one section horse that is ridden beside them, the rider calls out commands to the other riders. Of the caisson team, only the three horses on the left carry riders. This dates to the re-supply tradition, where horses were needed for replacements. In presidential and high ranking military funerals, a black riderless or caparisoned horse is walked behind the caisson, a boot mounted backwards in the stirrup, signaling a last command to the troops. A United States President is commander in chief of the armed forces, so a cap horse, is automatically part of the procession.

At 8:45 the horses feel its time to go. "Ready, mount!" shouts the section leader, and the four riders mount in sync. The section horse rider leads the procession. It is a half mile to the gate and another half mile into the cemetery. As the white team turns the corner, the black team of horses is readied in the courtyard. 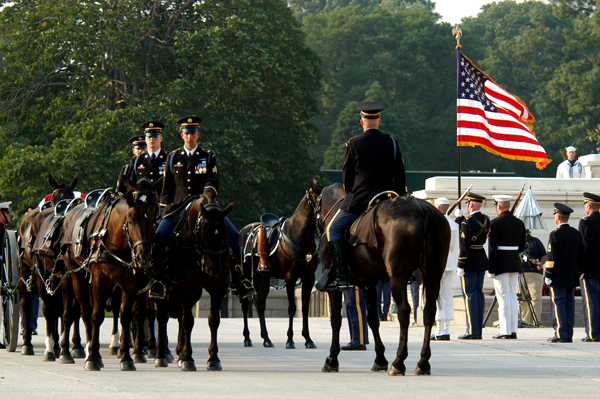 Sgt. Cava and I drive to observe the funeral proceedings in its entirety. The family of the deceased emerges from the non-denominational chapel. A military band strikes up a march, and the slow practiced procession into Arlington National Cemetery begins, the horses bearing their charge to its final resting place.

"What was it like riding in the Presidential funeral?" I quietly asked Sgt. Cava.

"It was an awesome experience," he reminisced. "I was the lowest ranking soldier and was thrilled to be chosen. It was an incredibly hot day, very trying to maintain the horses with so many people around. When the casket was loaded, there were a million clicks of disposable cameras, then an F-16 flew overhead, but the horses didn't budge. We used the black team, and Seargent York was the cap horse. Nancy Reagan gave us one of the President's own boots to mount in the stirrups. It was a day I'll never forget."

As the soldiers of the Caisson platoon move on in their lives, they will always be affected by these special horses, and their own unique place in the esteemed history of the army's Old Guard.