Standing at the top of a moorland hill, gazing at a herd of tiny mealy-nosed Exmoor ponies, Trooper, the savvy copper bay Dales pony I am aboard, knows which ends of the herd’s stallion to steer clear of: both.

These little Exmoors roam freely on the moors and are a treat to watch. Trooper’s owner Zana Jackson, who operates Devon Riding Holidays, is aboard gray Donna, one of her herd of Yorkshire- bred Dales trekking ponies. They have taken me for one of those day rides in early autumn that make you treasure every moment of shifting season sunbeam and wonder which century you’re in. We’ve wandered through perfect little English villages, down quiet country lanes, over grassy meadows and forest paths to North Devon’s ancient Tarr Steps, a stone Neolithic bridge that crosses the River Exe. Fording the river, Trooper stopped for a paw and a drink just by the Steps which support only humans. We tied the ponies to trees by the river and brought cheese and pickle sandwiches down from the nearby pub to munch on. Trooper likes pickles. 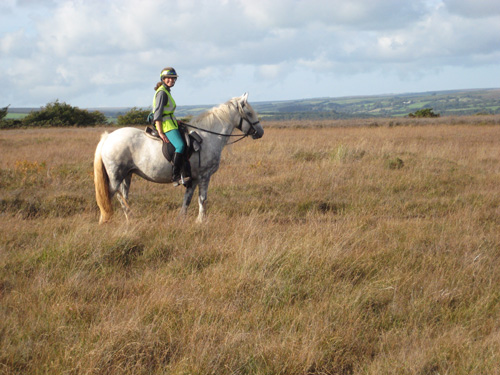 West Steart, a gorgeous 67 acre farm in a beautiful and quiet corner of Devon near Exmoor, just twenty minutes from the train in Tiverton and an hour from plane- friendly Exeter, just happens to have a race horse gallops running through it. Zana’s is a small operation, and she caters to people who really want to ride--not day trippers out for a lark. She takes beginners through advanced without inflicting one on the other and caters as well to families with varied levels of experience. Her ponies are stellar--truly bomb proof, but very forward going and beautifully schooled. Zana, a born and bred Yorkshire lass, ran the Dales Pony Centre in Malham, Yorkshire with her mother Angela for ten years, but has now moved her herd to a more temperate corner of the country. I suspect Zana may be something of a horse whisperer as well.

The decade old open plan farmhouse at West Steart has the ambiance of a three hundred year old home and lovely accommodations. I had a huge beamed bedroom with windows that open out to the meadows, and a cushy bathroom with a deep roll top bathtub. Zana is the chef as well and her meals are country gourmet with portions to suit the hungriest equestrian. The whole place is very welcoming and warm. Jim, Zana's husband manages racetracks and has started his own young Thoroughbred hopefuls. Opened only this past summer, he and Zana have fenced, mown and mended to create a safe haven for this thriving Dales herd and Jim’s potential stakes winners. 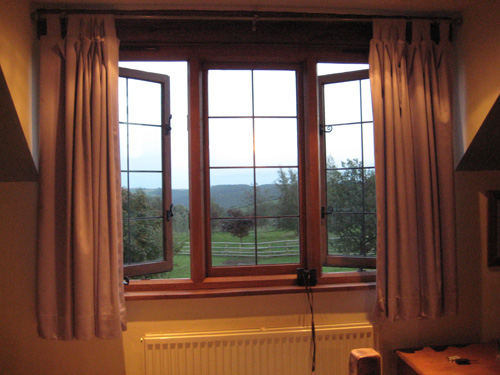 
Day 1:
On my first day I arrived late in the afternoon and found the farm gate high on a hill after a long climb up a single track lane past the village of Stoodleigh. Alfie the resident collie-cross, greeted me while Zana insisted on hauling my bags upstairs so that I could quickly grab my riding duds and change. Angela, who was in residence that weekend, fixed us a quick cup of tea (guests are welcome to grab a snack from the fridge or a slice of the delicious homemade cakes anytime they feel the need). Eager not to lose any more time, we headed out to the stables where I met Trooper, my steed for the next few days if he suited, and trekked out for a couple of hours tramp around nearby lanes and woods. There are endless choices for local riding and Zana knows them all. Though some of the riding is on lanes, we met very little traffic, and most of it was from locals who courteously stopped and let us pass by. Lively and sensible, Trooper is well named and I fell instantly in love, although Zana advised me that he has quite a fan club.

My guess is that anyone who spends more than ten minutes with a Dales pony has to fight an overpowering urge to braid its forelock. These sturdy, smart and sensitive ponies (an endangered British native breed) wear their manes so long and curly that their eyes are hidden under a curtain of horsehair. While grooming, I’d turned Trooper’s forelock up and looked him right in the eye. He’d looked ME in the eye, and his message was clear: put it back. Zana’s Dales herd currently numbers 17 ponies, several of which are home bred. They are family, with old Black, Zana’s first Dale pony, the patron of the bunch who keeps things well in order. 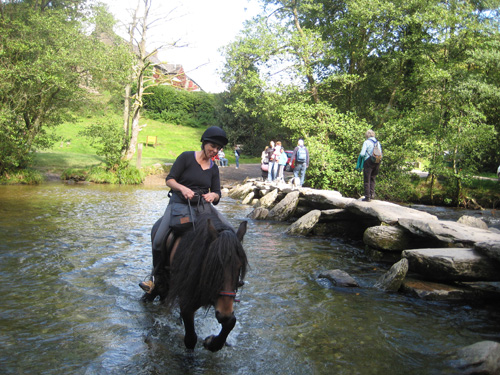 As I knew very little about the history of this engaging breed, Zana filled me in as we rode. Dales ponies, generally about 14 hands high, are built on a strong frame to carry great weight. Native pony means they were here when the Romans arrived. They are thought to have used them in lead mining production and as incredibly sturdy pack ponies carrying iron ore. They are light footed and versatile enough to hunt and show.

Zana competed in dressage successfully with Black when he was younger as well as in Trec competitions, where stamina and speed are key. Related to the black Friesian and snowy Andalusian, they differ from Fell ponies, which are their nearest cousins, in that they are larger, have a greater variety in color (Fells are most often black), more workmanlike (that means strong and heavy) head and more extravagant gait. Highlands, another northern native breed, are a distant Scottish cousin. Dales are named after the Yorkshire hills Zana hails from while Fells are Cumbrian, from the Lakes District. Dales are mainly found along the Eastern Pennines from the Peak district (Derbyshire) through to the Scottish borders.

Dales were used in both world wars to carry soldiers and equipment in difficult locations, as they were reputed to be able to travel extraordinary distances over rough terrain at good speed on very little feed.

“They were not returned”, says Zana meaningfully, though there are some herds of ponies in Pyrenees regions of both France and in Northern Spain. In starving war torn France, most of the ponies were eaten. These losses reduced breeding stock and diminished bloodlines, creating the need to protect them as an endangered breed. The introduction of tractors and motor power led to the huge decline of all working breeds in Great Britain but luckily the upland farms in the Dales in Yorkshire and Durham areas are so rough that tractors couldn't do the job of a Dales pony and so the breed lived on. Luckily by the time the quad bike was invented, the breed was as safe as a good trekking and leisure horse. 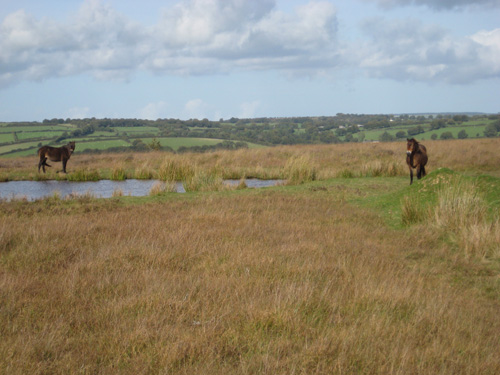 We ride back and carefully cool and curry our ponies (Zana runs a tight ship) and put the herd out to winter pasture. I watch, enchanted, as Pied Piper Zana calls them, “Come ponies, come ponies” collaring old Black as chieftain and whistling them away to the far fields. They come in high stepping trot and rushed gallops, eager not to be left behind. Later we feed the Thoroughbred mares and foals (Zana’s husband Jim’s passion) and check on the friendly stallion “bachelors” who roam freely in enormous pastures. Before I head in for a long, hot bath, Zana lets me play with her Swaledale lambs who will very shortly be Swaledale lamb chops and roasts served to guests in an effort for the farm to be organic and self sustaining.

Dinner that night is sea scallop starters, a comforting cottage pie, wine (guests are welcome to bring their favorites) and homemade chocolate rolls, all eaten at a cozy kitchen table with Jim, Angela and Zana as engaging company.