Riding Alberta Parks with Trail Riders of the Canadian Rockies

Each summer some of my friends and I try to do an equestrian vacation. In early 2016, one friend, who lives in Canada, discovered the web page for the Trail Riders of the Canadian Rockies. After looking at this myself, we decided this would be our trip for 2016 and sent in our deposits. We were soon joined by two of my friends from Georgia and another friend from Ohio. Our trip would be in Waterton Lakes National Park in the Province of Alberta, Canada, the sister park to Glacier National Park in Montana. None of us had been to this park before. 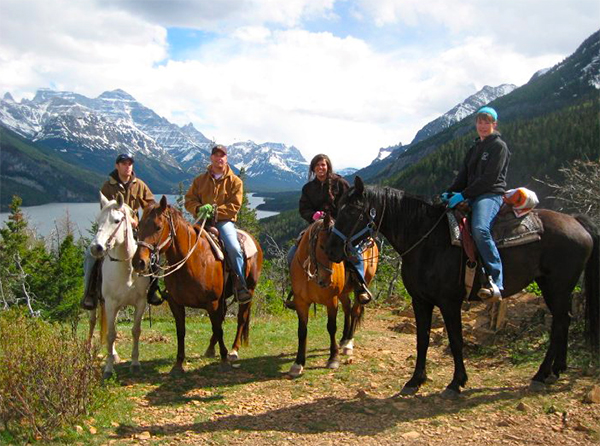 The Trail Riders of the Canadian Rockies (TRCR) is a non-profit organization of volunteers whose mission is to introduce people to the majesty of the Canadian Rocky Mountain National Parks via horses in a primitive camping environment, away from any noise or crowds. They rotate their rides between the various parks and have been in existence for 93 years with the Canadian Pacific Railroad being their initial sponsor. The CPR saw this group as a way to entice people to ride trains to their hotels in the Parks for an extended stay and spend one week in the wilderness, riding horses. This continued until the early 1960’s when most people traveled to the parks by car and the CPR dropped its sponsorship.

The CPR sold the camping equipment to the TRCR for $1 and the volunteer organization has continued up to this time. The TRCR utilize outfitters to provide the horses and do the cooking while volunteers set up the camp with TRCR equipment. Our camp was to be on private land near the Park. Prior to the trip, Robert, the group’s secretary/treasurer, stayed in communication with us, sending information, an itinerary, and a thorough packing list. A couple of weeks before our trip, we heard from Rick Godderis, who would be our volunteer camp host. With each communication, our excitement increased. 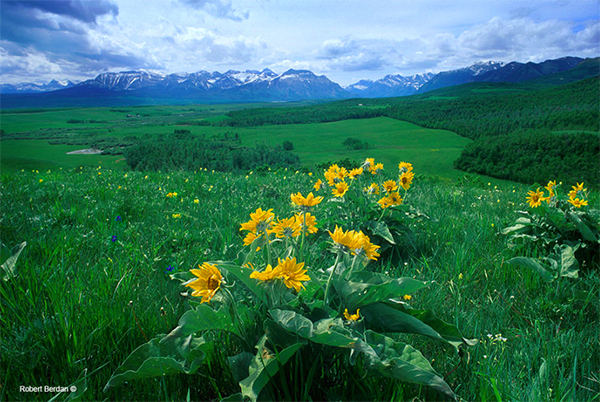 We decided to arrive in Calgary a day early and spent the extra day in beautiful downtown Calgary, spending most of the time walking in the park along the Bow River. We enjoyed a leisurely dinner at the hotel and turned in early to be ready for our 8 am pick up at the hotel.


After breakfast, we gathered our suitcases in the hotel lobby and met our fellow riders. There would be a total of 12 on this trip, including five from the US and seven from Canada. Riding experience ranged from four novices to one intermediate rider to seven people with extensive experience. Because every day involves several hours in the saddle, TRCR does encourage participants to do some horse riding before coming on the trip. 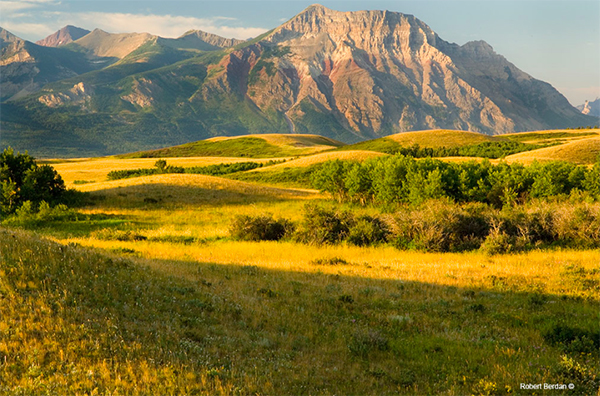 We headed off in the van, driven by Stuart Watkins, President of TRCR, who provided information on the group, the park, and the area through which we were traveling. About half way to the park (about 3.5 hours from Calgary), we stopped at the historic Bar U Ranch where we received a private tour. Hearing about ranch life on the prairie was very interesting.

We arrived at camp in time for lunch and picked out our lodging for the week from the four teepees and four tents available. Each domicile is set up for two people so the trip can accommodate 16. My friends and I all chose teepees, as this was a new experience for all of us. We learned through the week that teepees are quite cozy, repelling both rain and wind.

After lunch we were back in the van, traveling a short distance to Waterton Lakes National Park to meet our horses at Alpine Stables, the park concessionaire. There we met Dee and Deb, who own the concession, and Dee’s grandson Josh, who would be our guide for the week. It was immediately clear that they had read our narratives about our riding experience and had taken this into account as we were introduced to our preassigned horses. 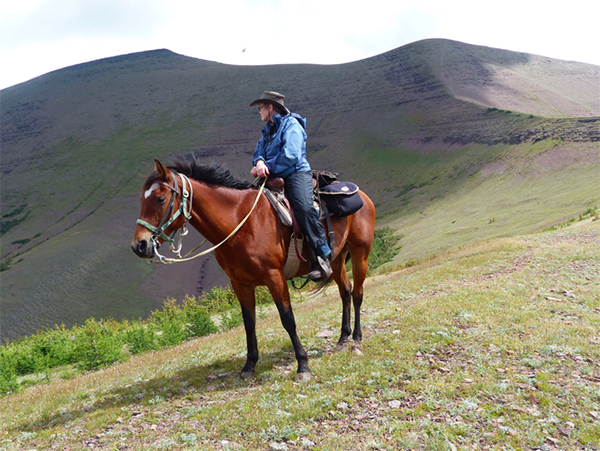 Since Dee is about 80 years old and still riding strong, experience rather than rider age was the major criterion, which I in my late 60’s appreciated. My horse for the week was Copper, a middle aged Appaloosa mare, who belonged to a private individual who wanted her to get some exercise with an experienced horseperson. Copper was fit and eager to go and extremely sure footed as we traversed the mountain trails. She reminded me of my own mare.

One day, she and I got to lead for a few miles, and both of us enjoyed this immensely. My friends were equally pleased with their mounts. The first day we went out for a two-hour introductory ride and within the first mile saw a black bear eating the abundant berries. The setting was spectacular. The mountains rise straight up from the prairie and there are beautiful lakes both at the edge of the mountains and up in the mountain valleys. Waterton can be windy and our first day’s ride was an example of that, but the horses were unfazed by the wind.

The next day, the outfitters reassigned horses to two of the riders, based on the introductory ride. For three of the five full days of riding, we rode out into the mountains for the day (each day a different trail), stopping for lunch and an optional hike. There was also a choice during the rides, either a more strenuous option up to a ridge or a less strenuous ride to a lake in the mountains. Dee would lead one group and Josh the other. I am afraid of heights so mountain riding can make me nervous, but I was never nervous on these trails. They were as wide as possible and very well maintained. Only once for a short distance, were we near an edge. 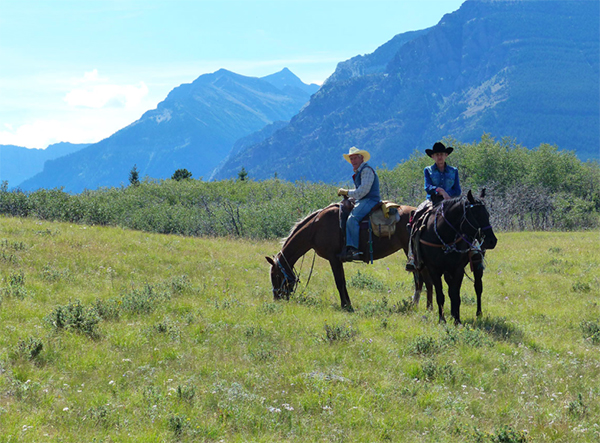 One day was either a horse ride along Waterton Lake or a boat trip on Waterton Lake to Glacier National Park. The boat trip and vouchers for lunch in Waterton that day were included in the trip price. The day was warm and sunny so most campers opted for the boat trip as did I. It was a lovely trip and very interesting to cross the international border, marked by a cut in the trees. We enjoyed a short hike with the US Park Ranger and his talk about the two parks, before returning to Waterton on the boat. The campers who chose the ride that day were equally pleased with their choice.

The last day, we rode all day on the prairie, which seems endless, with the mountains behind us. We saw more black bears, although we did not spot the bison herd which the Park has on the plains.

Each evening in camp, after dinner, there would be entertainment of some type, from a poet to a sing along, to a mead tasting, to historical stories, to our skit night. Everyone on the trip was pleasant and we enjoyed each other’s company. The food in camp was consistently abundant and tasty.

The highlight of the trip for me was sharing this amazing riding experience with like-minded people. The outfitters and the horses were outstanding. If you are looking for a wonderful riding trip for next summer, consider Trail Riders of the Canadian Rockies. If you are from the US, the exchange rate is favorable. Don’t wait too long though. In 2017, the only offer five trips, all in August with only 20 people maximum/trip. Remember, although the outfitter is a commercial operation, the Trail Riders of the Canadian Rockies, are a dedicated group of volunteers, so you will be helping them to maintain wilderness trail riding in these beautiful parks.