Bahamut, my adopted OTTB (off-the-track-Thoroughbred), has never been to a show or a clinic. He’s been off-of-the-racetrack for six months. During this time, I’ve been working with him daily, training him with a variety of exercises; such as desensitizing, lunging, flatwork and jumping. He’s been excelling at everything I have presented him with. I’ve only been working with ground poles and low fences for a couple months. I haven't jumped horses or properly ridden a hunter/jumper class in many years. The Ride with the Best Clinic at Equine Affaire with Peter Leone, seemed to be the perfect fit for what's next in our training. 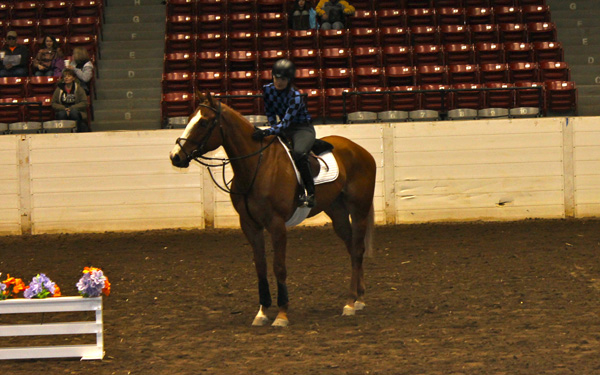 Bahamut standing in the center of the arena ©Angie Sanchez

We arrived the day before the clinic. My purpose was to school and acclimate Bahamut to the Ohio Fair Grounds. I wasn’t sure how he would handle seeing all these new things and deal with this busy type of environment.

He is a professional loading and getting on the trailer, which I attribute to his horseracing background. When he stepped off the trailer he looked around, but wasn’t flighty in the least. There wasn’t much to look at in the loading area anyway. He went to his stall, looked around for other horses and began to eat his hay. He settled nicely.

After I saw he was relaxed, quiet and comfortable, I went with my friend and did some shopping.  I mean, it’s Equine Affaire!

We came back after a few hours. I decided it was time to saddle up and do some schooling. With so much going on, and this being his first event, I was very nervous. Well, honestly, I was beyond nervous. I can’t predict what my horse will do, especially in such a stimulating and energy charged event like Equine Affaire.

As we walked over to the arena, we had to walk through a dark, heavily concrete area for dairy cattle. He was fine going through there, no problems. However, when he saw the open area; blazing sunlight, rows of concession stands, people walking and riding horses of various breeds and sizes, shopping bags and blaring noise––he froze and snorted. I couldn’t tell you how long we stood there, but when he finally calmed down and was ready, we continued on our way to the arena. I chose a particular arena in which to train. It was a good distance away from all the buzz and action.

When we arrived at the arena, horror of horrors, we saw two Clydesdales pulling carts. Again, he froze, snorted and cautiously watched them from across the arena. He was very nervous, eyes bulged, heart pounding, and began to back up and go in circles. I brought him closer to the center of the arena, bit-by-bit, and made him stand (well, the best I could). Eventually, the monster horses and scary carts left.

In all of my anxiety before this event, I forgot something very important––my lunge line, or as I call it, life line. My friend Angie offered to buy a lunge line, but my logic was, "Heck no, I spent enough money." Plus, I was comfortable to ride him. I get on horses more wound up than he was, on a daily basis.  Angie held him while I adjusted my girth and double-checked my tack, then I got in the saddle. Bahamut  had calmed down enough. I started to work him; first at the walk, then the trot and finally the canter. I kept his mind busy with circles, serpentines and figure-eights. When we both had enough, I ended the session and cooled him down.

During our walk back to the stable area, he was very good about taking everything in the second time. The only embarrassing thing he did was drag me to a concession stand selling funnel cakes. What can I say? This horse loves sweets!

We made it back to his stall safely. I untacked him and gave him a bath. When he was completely cooled off I gave him grain. As he had his dinner, I went with my friend, and did more shopping, (I hope my husband isn’t reading this). After a while, I went back to check on him; put his sheet on and kissed him goodnight. It was a really long, nerve racking day. I was ready to go to sleep and wake up to a new day.

I didn’t know what to expect from Peter Leone. I’m not familiar with his training methods. What I did know: He has trained and competed with some of the best equestrians in the nation. He has a proven record of success and continues to dominate at the highest levels in equestrian competitions. He is an Olympic Silver Medalist and trains at Lionshare Farm.

On the morning of the clinic, I woke up at 5:00 am. Angie and my mother met me at my home. We made a run for coffee, and some unhealthy food items that I won't mention. Bahamut greeted us with a low bellow. I comforted him and gave him a light feeding. After a while, I braided Bahamut’s mane and did all the necessary grooming preparations. As long as I kept busy, I wasn't too nervous.

It was getting closer to the time of the clinic. Braiding, grooming and clipping was complete. I tacked him up, double-checked that I was dressed properly and began to head over to the warm up arena with my crew. I got a leg up and went into the ring. This arena was adjacent to where the clinic was being held. Bahamut and I were both tense at first, especially being around all of the other horses. I started working with him at the walk, trot and canter. The only thing we had to stop schooling for was to adjust the figure-eight (noseband). Luckily, there was a nice Lady Trainer who was equally annoyed that it didn't stay, and fixed it before the clinic (thanks Lady Trainer). 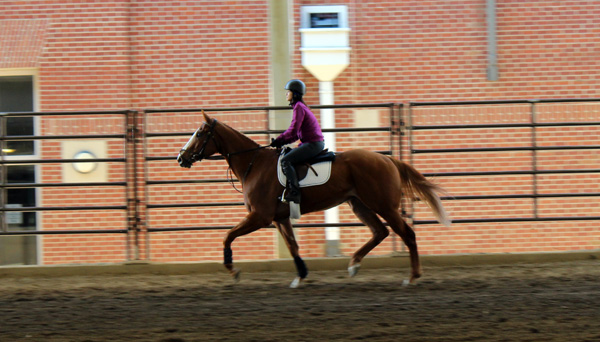 Schooling before the clinic ©Angie Sanchez

The Coliseum (arena where the clinic was being held) opened about 15 minutes before the clinic. I was nervous about bringing him into such a large arena. He’s never seen or been inside of one before, and we hadn’t been able to school in there, but it was time to go in.

We entered the Coliseum. Bahamut was being led in by my mom, like I was on a pony ride. I felt secure and he walked right into the arena. No hesitation. The entire class consisted of three horses. I noticed all the jumps and how they were set up. I began to slightly panic. Bahamut had never seen the likes of these fences!

We walked around the jumps. I wanted Bahamut to get a good look at them. We continued to walk around while Peter Leone did introductions, and stated the intention of the clinic. We shared who we (the riders) where, and our horses experience. Out of the other two horses, Bahamut was without a doubt, the greenest (most inexperienced) horse in the group. 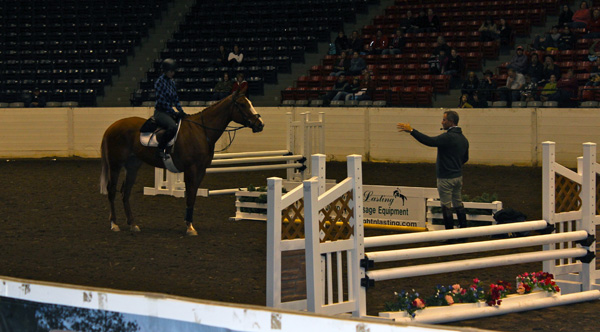 The first thing Peter Leone had me do, was drop my stirrups down three holes. I hadn’t realized how short I was riding, it felt natural and even long to how I normally ride. So, the Equine Affaire assistants adjusted my stirrups. I tried to get used to the new length. I felt like I had to keep reaching for my irons, but I went with it.

We did a some warm up exercises on the flat with cavalettis (ground poles), which Bahamut jumped over, every time. I found myself saying, "But, he never does this at home."  Then we started doing simple combinations. The first series didn’t prove to be much of a challenge. We started encountering problems when I had to jump one cross rail and halt right before the next fence. Peter was very brave to stand in front of the fence, because I wasn’t so sure we’d stop in time and not plow over him. After a few tries, Bahamut understood the exercise and did halt. 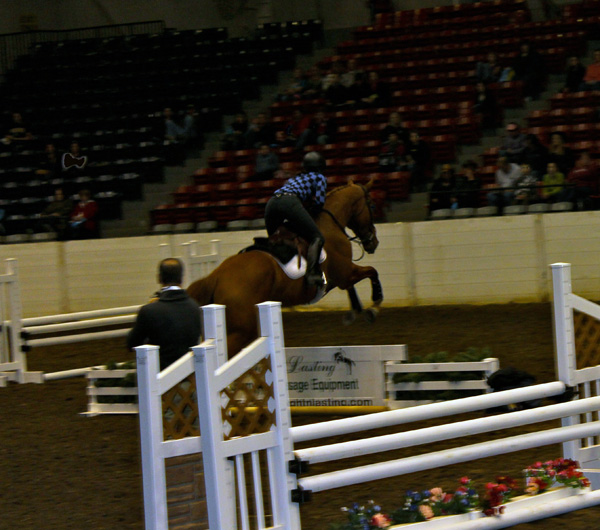 We had trouble going over some combinations, and Bahamut ran out at the last minute before one set of fences. I couldn’t get him over them, so Peter Leone asked if he could ride Bahamut. Before I could say, “Yes,” the crowd wildly applauded and cheered.

Peter Leone got a leg up, shared with the audience what he was going to accomplish with Bahamut. He began to explain how getting on a new horse is like, “Test driving a car.” He got the feel for Bahamut, and started to take him through a series of exercises.

As he rode, his micro-phoned assistant explained in detail what he was asking from Bahamut. Peter shared how he effectively uses his body to ask the horse to go forward, slow down and turn.  I watched intensely. I noticed how he used his legs and seat to move Bahamut, in any direction he wanted. Impressive.

Before long, Peter Leone took Bahamut over every fence in the course! He did it with the utmost ease, confidence and control.  The crowd applauded a great performance by the Olympic Medalist and an inexperienced OTTB.

Peter Leone riding Bahamut, a very green ex-racehorse (OTTB), whose been off-of-the-track less than six months. This is the first time Bahamut has been to any event or done a full jump course.

This Ride with the Best Clinic at Equine Affaire, with Peter Leone, was an invaluable experience for Bahamut and me. I’m very proud of Bahamut, an OTTB that hadn’t seen these kind of fences and has never been off of the farm or racetrack. This was an incredible experience. We learned so much from this clinic. I’m grateful to have been selected to participate. Where else could I have had an Olympic Silver Medalist ride my very green OTTB to perfection? Amazing. 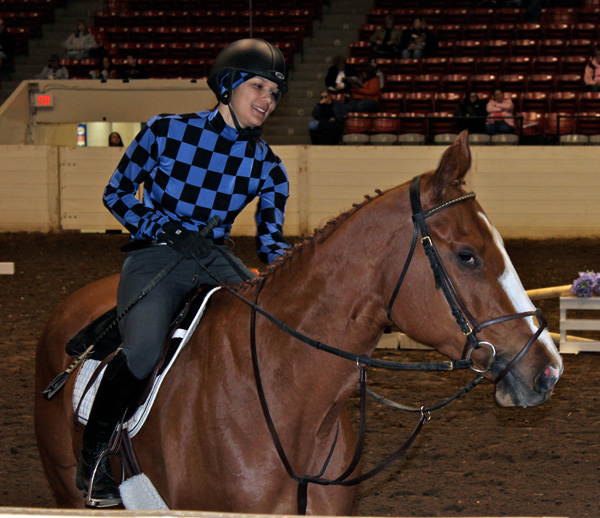 Bahamut, an OTTB with a heart of gold ©Angie Sanchez

Special thanks to my dear friend Angie Sanchez, and to my mother. I could not have made it through this event without your help.

Here are further resources to learn from Peter Leone: