Horseball, Fabien Grobon and what you don't want to miss at WEG in Normandy 2014

As Equitrekking is planning its first French episode, specifically starting with Northern France, there was no better person to ask for advice about Normandy than the man presently charged with planning the region’s largest event since the Norman invasion!

While in Paris, I had the opportunity to meet and enjoy lunch with Mr. Grobon, director of the 2014 FEI World Equestrian Games in Normandy.

Mr. Grobon is the former sponsorship director for Roland Garros, the French Grand Slam tournament (also know as the French Open) held each May in Paris. With ten years experience running such a major sporting event, it is no surprise that he was chosen to direct the Normandy 2014 games.

With limited time in Paris, Mr. Grobon and I agreed to a Saturday lunch. Since we would both have our families with us, he suggested that we meet at Paris' Bois de Boulogne Equestrian Center, and dine in the clubhouse restaurant. Mr. Grobon was spending the morning there to watch his sons participate in a "horseball" match and I was happy to show my daughter the equestrian center that I frequented when I lived in Paris.

The equestrian center and pony club, The “Centre Hippique du Touring Club de France”, part of the TCF, is well known in Paris, located in the Bois de Boulogne, Paris’ largest park. The Club offers riding lessons to all ages, while conveniently located in the northwest corner of the city, near Paris’ posh suburb, Neuilly-sur-Seine.

As we sat down for lunch, I noticed a glass wall separating us from several riding rings beyond. Our table overlooked an arena, and during our lunch a group of teenagers were taking a turns learning to canter. Later a group of 6-8 year old children trotted around on Shetland ponies, followed by a trainer lungeing a horse. We made our introductions and I began to discuss with Mr. Grobon, his vision and plans for games to be held the summer of 2014 and about equestrian things to do in Normandy. First though, our topic of conversation was what is horseball? 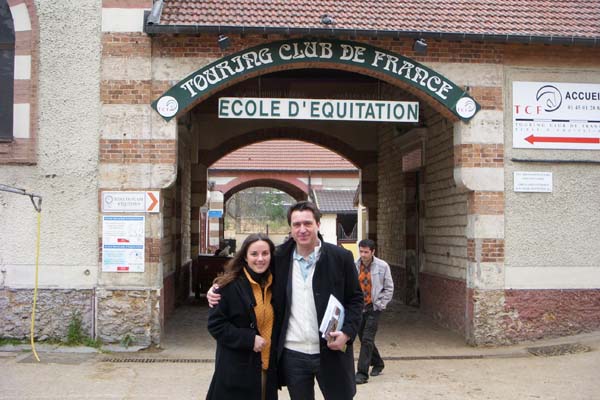 The History of Horse Ball

Mr. Grobon explained that horseball has been around since it originated in Argentina in early 1700. It was introduced in France in the ‘30’s by French Army Captain Clave, a show jumping world champion. The French Equestrian Federation defined the rules in the ‘70’s by which the game is now played.

Originally in Argentina the game was called pato, derived from the use of a live duck. Today I am happy to report that the game is played with a six-handled ball. No ducks were harmed in the writing of this article. 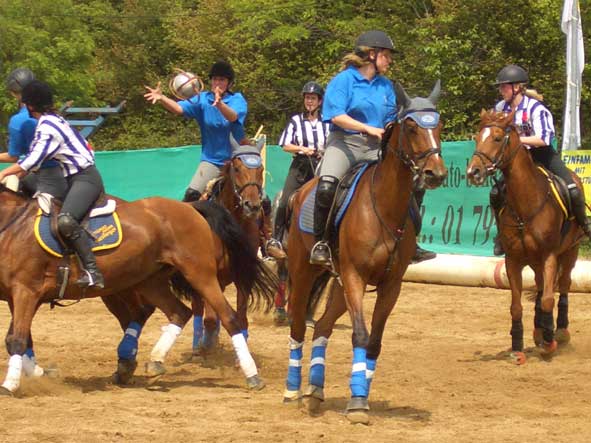 Horseball is a game played on horseback, combining polo, rugby, and basketball. A ball is handed between the players. Shooting it through a net scores points.

The basic rules involve a team of 4 players that make a minimum of 3 passes between 3 different players on their team. They must then score a goal through a hoop. The opposing team can use their horses’ weight to push players out of the way and grab the ball for their team.

If you are wondering how the players grab the ball, yes, it is with their hands. Players are often pulled from the saddle, which results in penalties. The rules for pick up are the following; the horse has to be galloping (or at a trot when the teams are usually less than 13-years-old) when picking up the ball. Stopping is not allowed as it can damage the horse's back. It also usually means the player has less of a swing to pull themselves back up, which means they could easily lose a stirrup and fall off.

The game is one of ten disciplines officially recognized by the International Federation for Equestrian Sports. The International Horseball Federation was created in 1999 and has sixteen members that include seven members outside of Europe. They are: The United States, Canada, Argentina, Brazil, Israel, Pakistan, and the Cayman Islands.

As we ordered omelets, salads, and sandwiches, Mr. Grobon started to explain the series of events he is responsible for organizing leading up to the games, including forming partnerships, securing sponsors, and planning special events for the opening ceremony of the games in Caen. I am not yet at liberty to give away these details that Mr. Grobon provided, but I will say that he has quite a program in mind!

The games will be held August 2014 in Caen, Normandy, the region of France just northwest of Paris. These games will follow a summer full of events that will make this THE summer to spend in France, beginning with the French Open at Roland Garros in Paris the end of May, and followed by the ceremony in June to commemorate the 70th anniversary of D-Day, the landing operations of the Allied invasion of Normandy during WWII. Next, cycling fans and sports enthusiasts will enjoy the Tour de France in July before the grand finale - the World Equestrian Games centered in Caen in August.

Mr. Grobon explained the intricate details of the game's three development phases. Using the paper placemats underneath our plates, Mr. Grobon sketched diagrams illustrating to us his ideas with remarkable clarity.

I quickly realized during the lunch that Mr. Grobon’s vision for the WEG 2014 Games is to expose the visitors to the region’s history, food, culture, and landscape. Simply put, his vision is for the "France of Normandy" to grip the world with it’s enticing flavors, unique beauty and welcoming people, if only for a short while. This is the very vision and result Equitrekking sets out to achieve with each of its episodes. Stay tuned......

Why Normandy Was Chosen for WEG

During lunch, Mr. Grobon explained that Normandy was chosen in part as the site of the 2014 games because of the region’s relationship with the horse, as well as its wealth and variety of history and culture for visitors to experience. The region today is populated with many equestrian centers but more importantly, the farmers across the region still heavily depend on the working horse to cultivate the land. The horse is visible in all parts of the region and has earned respect from the people of Normandy.

Due to its proximity to the sea, Normandy’s agricultural lands have nutrient rich soil and an abundance of grass, making the region an ideal place to breed horses. All of these factors also enhance the production on its farms.

Where to Take in the Flavors of Normandy

Normandy is divided into upper and lower Normandy, or Haute-Normandie and Basse-Normandy as it is called in French. The haute or upper Normandy, including the coastal fishing town of Honfleur, is called the “Jewel of Normandy”. With its Norman architecture and quaint harbor, local staples here include mussels and other delicacies from the sea.

Trouville-sur-Mer, also known as Trouville, is the next costal town to visit as you follow the coast south until you reach Deauville. Once a Parisian weekend retreat at the turn of the 20th century, today it's a popular fishing village where you can take in seaside promenades, and yes, horse races.

Several towns inland make up what is called the Pays D’Auge, which has typical Norman landscapes and scenery. In this area you will find the town of Camembert with its famous cheeses including Camembert and Pont-L’Eveque, to name a few. This area is also the heart of Normandy’s cider production.

Travel further south to Caen (pronounced kɑ̃ and not to be confused with Cannes in southern France), in basse or lower Normandy, and you can visit the Caen War Memorial.

A visit to Bayeux is a must, where the famous Bayeux tapestry is housed, a long embroidered cloth depicting the events leading up to the Norman Conquest of England. Bayeux is also just a short distance from the Normandy landing beaches.

Just north of Paris and right in the middle of the forest of Chantilly is the Chateau de Chantilly, a beautiful fairytale-like castle. This area is full of history and some of the best hunting in France, the racetracks of Chantilly, and a museum of the living horse. The Museum of the Living Horse or Musée vivant du Cheval, houses around 240 horses in its stables or Grandes Ecuries, with performances open to the public daily.

From April to October, Normandy will be celebrating the 1100th anniversary of the creation of the Duchy of Normandy. For more information on the medieval-themed events taking place throughout the region please visit: www.happybirthdaynormandie.com

The Deauville American Film Festival is held each September, screening the best of the year’s US releases. For more information visit: www.festival-deauville.com

Notes and Links on Normandy Travel and WEG

The World Equestrian Games in 2014 in Normandy are not to be missed. Mr. Grobon has guaranteed to bring the best of Normandy to your fingertips while offering a ticket price irresistibly affordable to all. Read more about the Normandy 2014 games.

For the horse lover, Normandy is the home of Les Haras National du Pin, an internationally known stud farm known as “Versailles of Horses”, producing some of the best quality horses in the world. Visitors are treated to an amazing display of dressage and jumping.

Be sure to read about Horseback Riding in France in a Five-Part Series on Normandy.

A special thanks to Mr. Grobon for his time and interest in Equitrekking and to his children for introducing me to horseball.