Here in Part 3, Adams details the high level of riding skill required, how he trains riders for the joust, and that many women are getting involved in the sport. 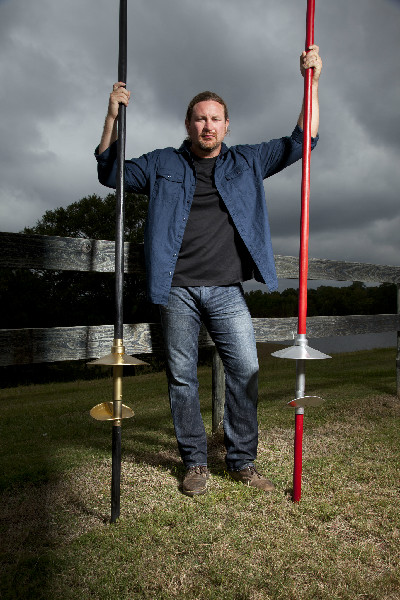 Karen Braschayko for Equitrekking: What kind of horsemanship does it take to be a jouster?

Shane Adams: You have to be a good rider before you become a jouster. I mentioned it on the show: It doesn’t matter how good of a rider you are, as soon as you add a suit of armor and a lance, and you put on a helmet in which you can’t see the horse’s head, it becomes a completely different experience. It’s unlike any experience any professional horse rider has ever had.

I’ve had people come to me who wanted to forego all of the basic joust training and just get right into it. So to teach them a lesson, I’d put them into armor. They’d get up on their horses, and the horse would just change his lead. That was enough of a switch that the inertia, with the 100 pounds extra of armor, could pull that rider down off the saddle onto the ground.

People do not understand how difficult it is first to ride in armor, then to ride in armor with a helmet on unable to see the horse’s head in front of you, then to ride with a helmet on and carrying an 11-foot long solid wooden lance underneath your right arm. It is very difficult, and I can only tell people to watch the show if they don’t believe how difficult it actually is.

Equitrekking: How did you match horse and rider on Full Metal Jousting?

Shane Adams: That was part of the show of course, to match the guys up and give them the best ability possible. At the same time, choosing a mount was also one of the advantages to having a team win. Basically, if the black team or the red team won a joust the day before and they were being tactical, they may pick the horse who may not be the best horse for their rider, just to take away the other team’s best pick. There was lot of chess playing going on.

Equitrekking: During one episode, you talked about spending a lot of time with your horse, grooming him and even spending the night in the stall. How important is the jouster’s relationship with the horse?

Shane Adams: The Spanish Riding School in Vienna has that policy, where the new riders are bonded with new horses. They spend all the time they can with the horses, and that includes bedding down with them at night. I have that same belief — the horse is not just a tool, he’s your teammate. Kids, I don’t suggest you try this at home because it can be dangerous.

There were many times growing up that when there were problems with my parents. If my parents were fighting, I’d go to the barn. I was four or five years old, a child, and I’d go out to the barn and crawl into a stall. Our old mare would cover me with hay, and I’d just sit there to get away from home. Even back then, I learned that I was connecting with these horses. It just wasn’t a safe zone for me. It was a place for me to bond and be part of the herd. It was the best way for me to gain connection with the horses.

My wife will watch me go out into a field and just bond with the herd. She said she’s seen nothing like it, but for me it’s completely natural. It’s what I’ve been doing since I was a kid. I was basically raised by a herd of Arabian horses. I’m very thankful for that, because it’s turned me into the rider and the horseman that I am today.

Equitrekking: How do you recommend training to become a jouster?

Shane Adams: Well first, think twice. Be careful what you wish for. Take the right course. Don’t do what I did, and learn from my mistakes. People have probably heard me list all of the injuries that I’ve had, and most of those injuries are from reinventing the wheel.

I was trying to come up with a process that’s safe for people to joust, but at the same time, still get it respect as an elite and extreme sport. I don’t joust with balsa lances. If I did, I’d be just the next dinner show or choreographed jousting troupe. For me to bring attention to the sport of jousting, I knew that it had to be done for real. The only way that I could get it to where it is today was to do it for real.

I’ve taken the time to find a safer way to do it. Though I’ve broken my hand many times, I’ve developed a system where the vamplate breaks away from the lance at a certain amount of force. We’ve added the arrets to help take that force of impact on your body instead of your hand. So there are different things that I’ve reinvented just because I didn’t have an 800-year-old knight to teach me. 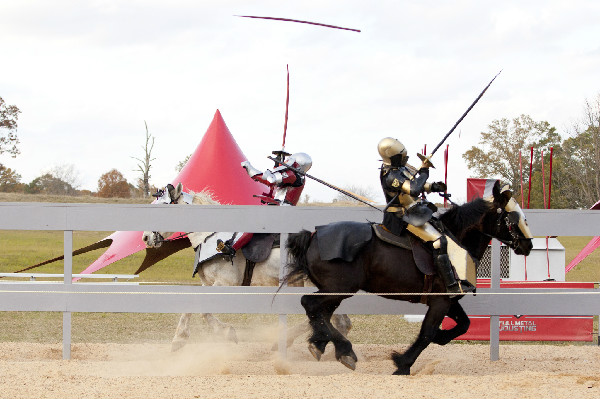 Broken lances and shrapnel indicate a good hit in a joust.

I haven’t been injured in the sport aspect of it in probably a good seven years now. We’ve only had one serious injury with my troupe that was caused from an unhorsing, and the gentleman broke his arm. It was the way he landed. The armor he was wearing actually broke his arm, because it got to the point where the ground didn’t give way anymore, and neither did his weight. Of course, if you make a mistake in the sport of jousting, it’s going to hurt.

There are still injuries, but there are more injuries in a high school football game than there are the sport of jousting right now. I’d like to think that it’s because all of the trial and error that I’ve used over my 20 years in the sport. I’ve been able to come up with a safe, but yet fiercely competitive and hard-hitting game.

So I advise people who want to joust: Do the research. Even though I have my own jousting school, there are other schools out there. People are welcome to come and train with me, but I just advise that they do their homework and pick the best trainer for them. Some people don’t want to get involved in the sport to be on the national competitive field. They just want to get involved in the sport to do it. If that’s just using a balsa wood lance, then do it, but again, still find the proper training.

There are probably 200 jousting associations out there in the world, so do some research. The sport has not gotten to point where everyone is on the same page. A person from Belgium will joust a different way than a person in Norway, and a person in Norway will joust a different way than we do here in North America. There are some North American associations that think I’m crazy for bringing the real sport of jousting to life, and they say it’s completely dangerous.

Well, it’s jousting, yes it can be dangerous, but so can be going around barrels, jumping a fence into water, or asking your Quarter Horse to bring down a bull. It’s an equestrian sport, and people get involved in each equestrian sport for their own certain reasons.

Equitrekking: How do women fare in competitions?

Shane Adams: Well, unfortunately the sport of jousting is very physically challenging. Though women come to compete with great equestrian skills, often they do not have the physical ability to back it up — yet.

One of my female students, a knight for my jousting company, is six feet tall. However, being that tall, she has to work that much harder at her own center core. Those extra inches are a lot to pull back up onto your horse after a hit, but she has been able to win jousts and unhorse competitors.

It’s like the movie G.I. Jane. If a female wants to be competitive in the jousting arena, she can be, but she has to dedicate herself, be that physically demanding of her own body, and gain that strength. So it is possible. Unfortunately it’s just that the genetic makeup of men and women is different, and men can retain muscle mass longer and easier than women can. It’s not to say that women can’t do it. It just takes that extra work.

I have a clinic coming up in August, and there are quite a few females who are going to be a part of it. Will they be jousting at the end of it? Possibly, or possibly not, but at the same time they’re picking up the tools and techniques needed to take that next step. Hopefully they’ll focus themselves into becoming strong enough and be able to be competitive on the field. After a couple weeks of training, I can take a professional rider and turn her into a jouster. But I don’t want to just turn her into a jouster, I want to turn her into a champion.

Equitrekking: What do you want people to know about the sport of jousting?

Shane Adams: I hope everybody respects what we do. Though there are other people who may not be as professional involved in the sport of jousting, there’s a professional side to it. This is my dream come realized, and I’m hoping that the readers will find the truth out about it. Hopefully in years to come people will learn more about the sport.

A lot of people questioned, well why use the modern-looking armor. Why not just use the old armor? It’s because I needed people to realize that this isn’t just your next Renaissance festival. I needed to bring it to the modern-day public, and the only way to do so is to show a modern facelift to the sport.

Though there were people in the historical societies booing me, there were more viewers watching my jousting show than historically ever watched a jousting tournament, live or not live. With over 1.9 million viewers for the first episode, that was more people watching the joust than anybody ever has. Who knows how many fans of the sport of jousting are out there, but they’re in the millions for sure.