My Introduction to Cattle Branding

For my summer vacation away from college, I'm working as a wrangler at The Home Ranch in Colorado. Read about my experience as a first-time calf brander!

My Western education at The Home Ranch started almost immediately after I arrived for work on Friday afternoon. A CPR/First Aid class was held for the wranglers at the local fire department, and then Sunday, on our day off, there was a calf branding at Sand Mountain Cattle Company, the neighboring cattle farm. We were all invited to participate. Eager to not miss a single experience, I arrived (a bit late) at 9:45 am, unsure of what to expect.

As I stepped out of the car, my senses were immediately assaulted by constant wails of complaint from the calves and the undeniable stench of burnt skin (trust me, they don't smell like hamburgers right away!). 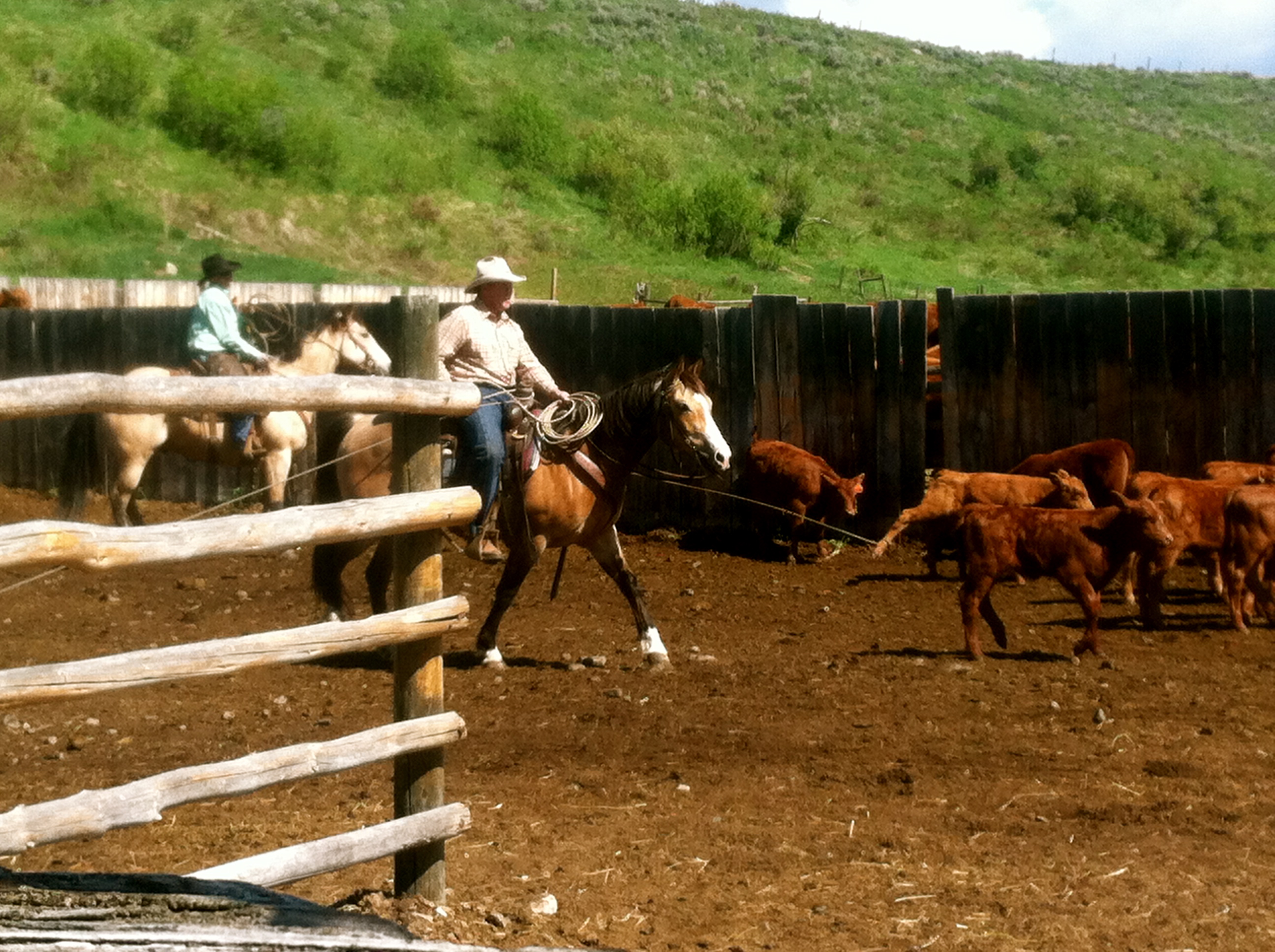 Ropers in the cattle pen catching calves to be branded.

We headed over to the corrals where all the commotion was happening and were immediately invited in to get closer to the action. The scene was part state fair and part family barbeque, with people standing around and laughing at the creative ways that some tried to catch the calves and with numerous little buckaroos-in-training trying their best to haul their own cattle.

I walked over to my fellow Home Ranch Wranglers, Alec and Jamison. They were knee-deep in the action... literally. A fellow helper explained to me the basic steps to the operation.

How to Brand a Calf:
1. A roper or a few guys on foot go into the calf pen and rope or catch a calf.
2. The calf is either dragged or carried out into the second pen.
3. As the calf comes through the gate, one of the waiting helpers grabs a front hoof and flips the cow onto its back.
4. Depending on how the calf was tied, one or two helpers hold it steady while it is branded and vaccinated.
5. The calf is released and tears like a bat out of hell to the other side of the pen, where its fellow branded cows are waiting.

Home Ranch wrangler, Alec flipping a roped cow over to be laid in the branding pen.

Although the operation seemed simple enough, I soon found out it was anything but easy. Though most of the ropers were excellent, the calves rarely allowed the smoking-hot branding iron to touch their skin without some serious complaining. One of my favorite moments was when a calf's head got away from fellow Home Ranch Wrangler, Alec, and he dutifully kept it in a headlock using only his legs until others could step in to help him restrain the frightened animal. Jamison also earned a certain amount of fame when he tackled a loose cow to the ground, receiving a swift hoof to the face.

Eventually, my curiosity got the better of me, and I worked up the nerve to try my hand at calf branding. The guys were nice enough to pick off a smaller calf, and walk me through the steps to holding it down. If a roper is able to rope both back legs when catching the calf, it takes only one helper to kneel over its neck to keep it quiet for branding, as the back end is held steady by the roper on horseback. If the rope only catches one back leg, two helpers are needed–– one at the head and one to sit behind the calf to hold its back end steady.

A helpful bystander showed me how to hold the back end, which is easier than kneeling over the front. You have to sit down, with one booted foot pushing the calf's left leg forward while you hold the right leg in your arms. You also have to press your other foot right against its–– err–– backside, to contain any nervous bowel movements.

I managed to hang on (barely) to two thrashing calves while they got their brand and vaccinations. I went to the group barbeque following the branding feeling sore but exhilarated. How the others branded so many calves in just a few short hours when I was exhausted after two, I have no idea. I have nothing but respect for these true cowboys. Alec and Jamison from The Home Ranch crew went home with bruises and jammed thumbs, and I left with a memorable experience that I won't soon forget.

Stay tuned for more posts from my summer as a wrangler!

About the Author: Molly Murphy is a college student at KSU studying Creative Writing and an English rider. For her dude ranch blog on Equitrekking.com, she writes about her adventures as a wrangler at Home Ranch, a Colorado dude ranch that has been welcoming guests since 1980. Visit Home Ranch and other great dude ranches in Equitrekking Vacation Guide.